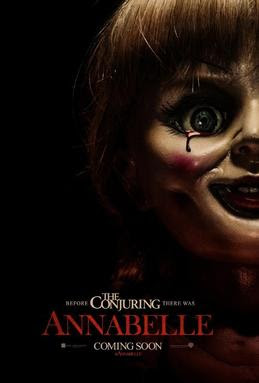 And here we have the prequel to the film The Conjuring,with its star Annabelle,who barely gets a mention in the first film,but still producers green lighted a stand alone film. Set a whole 12 months before the Conjuring. About a freaky looking doll,that young expectant parents buy,as the lady loves Victorian dolls, yes this young couple are church going lovely people. Yet one night they are rudely awakened by noises at the neighbors house,the husband goes to investigate to find the couple next door,brutally murdered,and the murderers are moving house to house, they invade the house of the pregnant woman stabs her in the abdomen,gets over powered by her Husband and when the Police arrive the one guy is shot,whilst his girlfriend commits suicide,holding the Annabelle doll.
Turns out this murdering couple were part of a Devil Worshiping cult and were killing people as sacrifices. That is the story, the Doll becomes a conduit of Evil,being taken over by the Demon,the two muderers were trying to wake. I'm being honest I actually thought this wasn't too bad,and is certainly better than its predecessor The Conjuring.
With the standout star being Annabelle Wallis a British actress mainly famous for TV roles especially the TV drama Pinky Blinders who plays the expectant Mother Mia if only could the same be said about  her husband Ward Horton, who comes across as a complete wet lettuce,a complete waste of time as a Husband and family Protector. Shame also Alfre Woodard only had a small part in this,but her character is the most Interesting in this film as a psychic,who senses the Doll is possesed by an evil being. All I can say is it is alright,not groundbreaking,with a few decent jump moments,but still a poor excuse, for probably a silly amount of money being spent on this,and why because we can,and we have a freaky little Doll to show off and another sequel in the making as we speak.
A disappointing film,but still better than the Conjuring,with in places some genuine scares.
2/5⭐️⭐️ 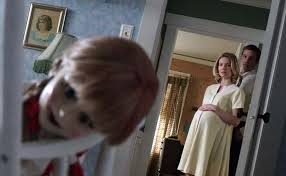