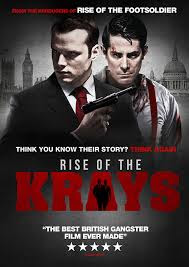 Finally a crime drama that is not sugar coated with the usual, "oh they were nice boys" no they were not they were hard as nails.  And complete bastards,they never got to where they were,on good looks,and nice manners.

Now this is the extremely low budget version to coincide with Legend with Tom Hardy,which I have heard is a watered down version. With actors making their debuts on this film,with most being established stage actors,that some critics have picked up on,saying the acting is poor,well I disagree,whilst not being method acting it is still decent enough to watch.

Especially Simon Cotton as Ronnie Kray who plays,a truly unhinged individual,with schizophrenia,and other mental health issues that make him very unpredictable,and excessively violent,with Reggie Kray being the more thoughtful,careful thinker of the two,does it make him less dangerous no it does not.

As I mentioned earlier it is very low budget,and yes it maybe shows on-screen,it is still a film that is okay,even people who knew the twins said this showed a better,and more  honest viewing of the Krays, and their mannerisms and violence,than the Tom Hardy feature. It is strangely produced by David Sullivan of The Sunday Sport fame,and co owner of West Ham United,who probably produced this using spare pocket money from the petty cash draw.

Do not let the negatives put you off this film,yes it is not perfect,it is low budget,but the two leads really do look and feel menacing,and if I was alive in the swinging sixties would not want to run into these individuals. Who through violence,bribery,blackmail,intimidation,and murder controlled the East End of London,even with political parties,and chief of Police scared of them due to the information they owed,on certain members of the elite.
Not perfect but still a good watch. 3/5*** 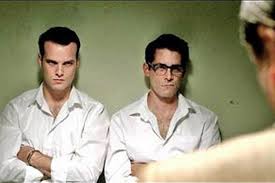