A very different, and very depressingly take on the usual Zombie genre 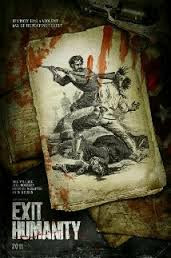 Following my very bleak film review of Child Of God,I have another fun,fun film, I'm hoping you are getting the irony as this film is as bleak as they come. A very different take on the Zombie genre,and also a very slow burner. Set just after the Amercan Civil War,when Men are returning home to their family's. This film is told through the eyes of one young solider. Who through the spoils of war is already a broken man,who has heard rumors of the dead not staying dead,and a great plague that has touched this land. On returning his wife turns into the undead,and his son runs for his life. With a determination to reunite with his son,and survive the bleak new world,he sets off with shotgun in his hand to fight the undead,and chronicle his experience through a diary. The one thing this film reminded me immediately was Red Dead Redemption, The Zombie update,they are so similar,to the fact of his wife dying first,his son unaware of being bitten,but still runs. As I said previously this film is very bleak,with no Walking Dead feel to it,the Undead are as slow as this film,the human survivors are more terrifying than the Zombies themselves,raising the question,in the face of tragedy,and death,man becomes,the greatest enemy. Hence the title Exit Humanity. We are told by a Brian Cox voiceover,that this is all true,but is it all in the head of Mark Gibson,and the undead are the manifesto of the horrors of war. Directed by and starring Mark Geddes as I said the film isn't a bad film,but with very slow pacing,the average gore hound will not be happy. 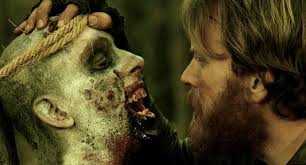