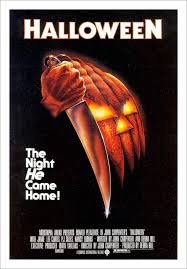 A film to most Horror fans this is as famous as the tradition itself,when I think of the 31st October,yes it is Halloween the tradition ,but I always think of this great film,and franchise also. A film believe it all not is celebrating its 38th Anniversary this year. Written and directed by quite an unknown director, at the time. Yes he had two films already behind him in Dark Star, and Assault On Precinct 13. This was the film that put John Carpenter firmly on the radar.
A film so simple that just works, a story of a young boy,who on Halloween decides to butcher and murder his own sister,for reasons unknown. This boy is Michael Myers,who cut to 15 years later,after being in a secure unit,he will never leave,manages to escape and return to Haddonfield,to inflict death and mayhem once more,with his psychiatrist,and Doctor trying to locate him.
What we have left is probably the most iconic of all the slasher franchises ever made,the one that set the bench mark,for others to follow. A story of not a man,but an evil being,who has no conscience,with an inescapable appetite to kill. Who up until the wrap of shooting,was only known as the shape onset. With excellent performances from Donald Pleasence as Doctor Loomis and the best performance going to Jamie Lee Curtis as Laurie Strode,the first and truly original scream queen. This film is perfect,with probably the coldest,most calculating killer,to ever grace our screens, that we all know and Love  as Michael Myers,which was fabulously created by,and directed perfectly by John Carpenter with the great soundtrack by the man himself this film even now is perfection.
5/5***** 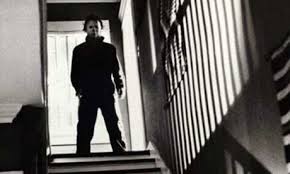