976 EVIL a direct line to Hell itself 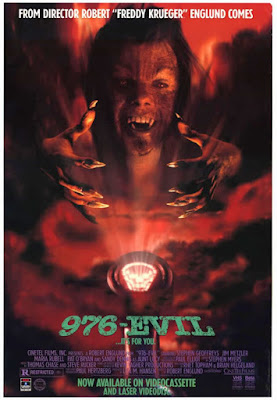 One more from the vault of classic cheesy cult films of the eighties,with this beauty coming out in 1988,directed by the one and only Robert Englund. A story of two cousins being raised by an over baring church going,conservative Mother,with Spike being the confident cousin,and Hoax being the nerdy geeky shy one,probably due to his mothers strict upbringing. With Spike being the rebel,who is cool,gets the Girls, Hoax gets very jealous,even though his cousin loves him,and protects him from the Bullies at school, Hoax would love to stand on his own two feet. When they both see a flyer for a phone number that gives spooky predictions,and Horoscopes,they both try it. Spike being too cool for school thinks it is a joke, but Hoax becomes addicted to the phone number,because the person the other end really gets him. This gives him confidence for the first time,and he defeats the Bullies himself,without the need of his cousin. Trouble is 976 EVIL is actually a direct line to Hell wanting damaged souls,and poor Hoax is that poor Soul. And his soul is taken over by the Devil Himself,with a hole opening up in his house,for Hell to come to earth. This film is not particularly scary,or groundbreaking in any way,it is just a daft enjoyable romp. With Hoax turning from a quiet,shy kid,into this vile Demon,intent on murder. With fantastic biblical references in the film,such as the scene raining frogs,which is a little disturbing. It is really an enjoyable,if a little dated film,that I recently watched on Crackle. You can probably tell my affection to 80's Horror,and any 80's film in general,it was the decade I discovered cinema,and home video,and with cool liberal parents,who would rent the video nasties for me,even though only being a young teenager at the time, this set me up for my enjoyment of Horror ever since. 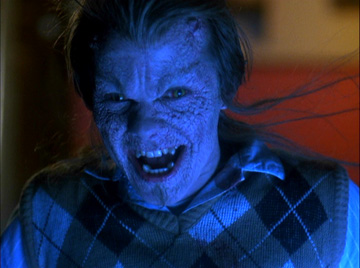