I had seen the trailer for this early this year and thought it looked good. I never saw a release date on DVD in the UK. I actually came across it on UK Netflix.
So I thought I would give it a watch,and my goodness me I'm so glad I did.
I have never seen Pierce Brosnan so tough, now he was my favorite Bond, but was let down by poor scripts,and directors, and after the Brilliant Goldeneye,Bond movies turned into the usual farce of early movies,with too much humour,campness. If Pierce was half as good in Bond as he is this,he would not have lost his Job to Daniel Craig.  In November Man he plays an ex CIA opperative Peter Devereaux ,retired after a failed hit 6 years earlier,when he was training his protege,and when a child is killed,due to his protege failure to not shoot quicker he gets out of the spy game.
To only be approached by his former boss to help a a spy get out of Moscow,to defect to the west,because of the information she has on an up and coming,presidential Candidate in Russia,who is known for his early war crimes abuses,in Chechnya.
The rest of the story is all about dodgy deals,between Russia,and deals with the CIA which turned a blind eye to war crimes,to get this Presidential Candidate into office,because of his strong views on Arab Countries,so they can be allies. Now I don't pretend to understand all the political stuff in this,but does not take away what is a bloody good spy  thriller. Pierce Brosnan is superb in this a bad ass who swears a lot and is a shoot first and ask questions later type of guy.
Olga Kurylenko as Alice the Girl Pierce has to protect later, is once again the most gorgeous woman I have ever seen on this earth.ever since I saw her in  Quantum of solace I have fancied her,she is just perfection.
The protege in this who becomes Pierce 's nemesis is very good in this also and Luke Bracey you were brilliant in this too.It is directed by Roger Donaldson who reunites with Pierce again,after their stint together in Bonds Tomorrow Never Dies,as I said I cannot fault this film whatsoever,it is really, really enjoyable. And I have never seen the Irish Mr Brosnan so bloody tough. 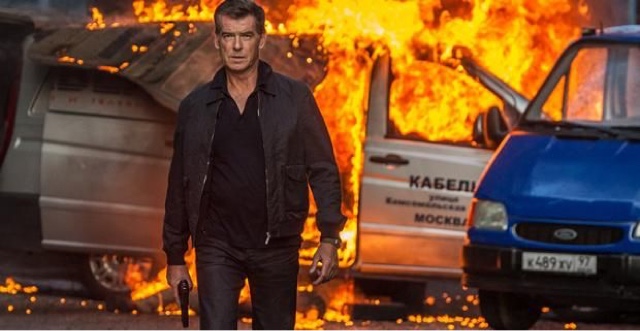