What would you do for money

If you are desperate what would you do for money,and this is the question this film asks,what lows will a human sink to for it.
I saw this film early this year,yes it was released last year,but once again mainly for the streaming market, I never saw this DVD on any UK shelves. It is of a simple story of a young couple,married, with a baby,who are in financial difficulties like many couples across the world. To make things worse the day Craig gets his eviction notice in the post,is also the day he is made redundant by the company he works for,with no financial pay off,as the company has no money. Too ashamed to go home to his wife he goes to a Bar, yes it is not the place to go if you are down,to drown his sorrows.
He bumps into his old best friend from school Vince,who seems to be In a similar situation. They reminisce about old times,and how things were better when they were kids,with no responsibilitys,no Mortgage,Bilłs to pay for.
It is then a couple calls them both over to join them at their table for a drink, Violent and her Husband Colin,they precede to buy Craig,and Vince a drink,then another, and another. Then Colin pours a shot in two glasses and puts $50.00 on the table and says to the friends the first to drink the awful shot keeps the money. That is the first dare of the night, the boys take up the offer. Then what becomes childlike dares in the pub,escalates into a strip bar,with Colin daring the boys to touch up a girl to get thrown out,or get into a fight,for money once again. When Craig is knocked unconscious by someone in the club,having a broken nose,wakes at the house of Colin and Violet. This is were the dares turn into serious cash. With the two best friends loyalty being tested,to see who can do the most elaborate dare for cash.
This film I would have to say is marketed as a comedy, but it is really a very dark film,that gets under the psyche of the human spirit,and what depravity we will put ourselves through,to make some money,without resorting to illegal means. This couple know this,and it is a Sick game to them and they like to play. Craig,and Vince are two nice Guys caught up in a shit situation with money being thrown at them by this rich couple. I'm not going to spoil the ending but the dares get more sicker,more twisted,with serious amount of cash being offered, including loosing body parts and even Murder.
The problem is Craig and both Vince know that Colin is a psychopath,and if they don't go though with it Colin will probably only kill them both anyway. Is is a sick and twisted film,that in the end really does get to you. It stars Pat Healy as Craig, Ethan Enbry as Vince, and Sara Paxton as Violet. With David Koechner who is scarily psychotic,as the person who gets off on the misery of others,you will recognise him from mainly comedy roles. He is famous for starring in Anchor Man 1&2. He is brilliant in this but so is Pat Healy who plays Craig,who is only doing all this for his wife,family,and to keep his family home. It only cost a $ 1,000,000 to make this film, and is the Directors first feature film E L Katz you have made a brilliant but probably one of the sickest films, that is psychologically scary,and really makes you think, What If? What Would I Do? 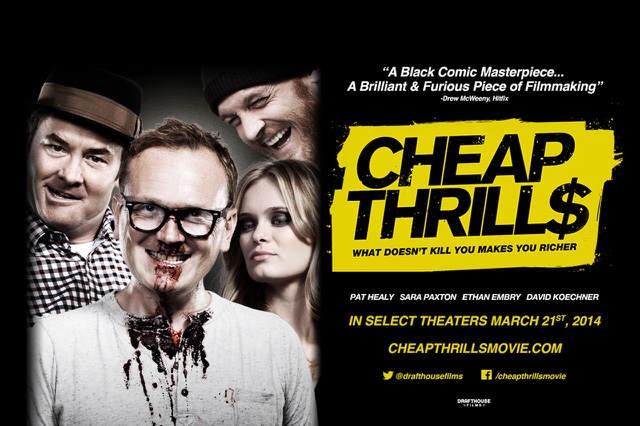