The worst film possibly ever made.

on September 12, 2015
I think I just witnessed the worst film I have ever seen in my life. I know the reviews on all online sites were negative,but me being me thought I still had to give it a go. Even poor films I can see a little light in them,and maybe find a little positive.
In this I could not it is just awful in every sense,the acting is terrible,yes I can normally ignore that,if the film is maybe still going in the right direction. The script is the most clumsy,unbelievable dialogue I have ever witnessed on screen. Everyone involved in this should literally disappear like in the film. I like Nicholas Cage,he makes a lot of crap films,to pay off an expensive divorce. But he has sank to new lows with this. I cannot believe it is the same actor who was brilliant in Leaving Last Vegas, Face Off,Con Air,Joe,Kick Ass, Adaptation and Wild At Heart. Considering this film is meant to be taken seriously, two other films kicked the shit  out of this and they were This Is The End, Seth Rogan's comedy take on the Rapture,and the End of Days, and the comedy Rapture Palooza with Anna Kendrick And Craig Robinson as the beast, or Devil. Avoid,Avoid please,do not be fooled by the reductions in supermarkets, I saw this the other day £2.00 on DVD and £4.00 for the BluRay even then do not buy,spend your money on something else,give it to charity,but do not spend it on this piece of crap. 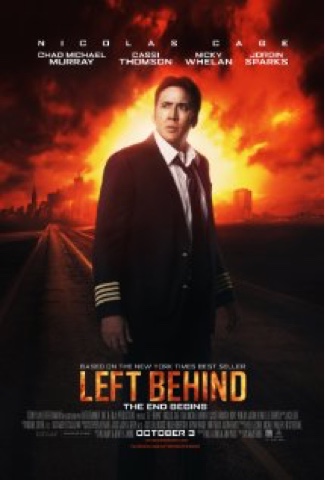