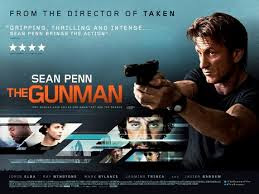 This film on paper looked a sure fire Hit with one of the best actors in a generation Sean Penn in his first major action role. Taking on the usual mantel of aging over fifty actors,in action roles. With the most famous Liam Neeson as the new action star on the block.
It should as I said worked,with the French Director Pierre Morel who directed probably my favourite action films in the last decade and that was Taken.
Now I did enjoy this,it isn`t a bad film,and does not deserve the negative reviews on most online sites. But I still feel something was missing with this film,something that doesn`t quite click.
It has a Stella cast too alongside Penn we have Javier Bardem,Ray Winstone, Idris Elba.
The story of a soldier who has the job of taking out a Minister Of Mines in The Republic Of Congo,the assassination put him into hiding.Then eight years later a hit squad then comes back to take him out.Of cause he has the usual set of skills  to go into hiding then to take out the bad guys.
As I said I enjoyed it Sean Penn was his usual intense self,and makes a decent action hero,and the whole film is actually acted really well. But as I said before,I did not get that spark I normally get from action type movies,and found  the whole experience just a little too serious for my liking.
It is based on a famous book from the Eighties called The Prone Gunman,and has the usual amount of corruption and Political intrigue, but something was still missing from this film.
It has actually been classed as a Box Office Flop costing 40,000,000 dollars and only grossing back 15,000,000 dollars worldwide.Goes to show by having a really good actor in a film does not always make it a great film. And also I might upset people but Sean Penn isn`t to everyone`s liking.