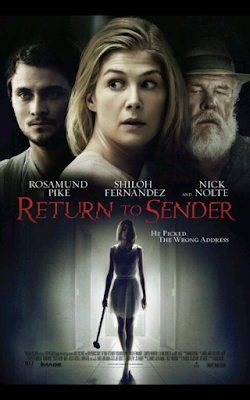 Here we have Rosamund Pike playing a Nurse named Miranda in an Intensive Care Unit,she is used to saving lives,and looking after the severely ill. But she seems something of a cold person. Yes she is liked by her friends,and her heart seems in the right place,but still seems to very socially withdrawn.

When after constant pressure she decides to agree to a blind date her friend has set up. But is generally happy by herself. She seems to have issues with hygiene,and uses antiseptic wipes on anything she touches.

She has a strained relationship with her Dad played wonderfully by Nick Nolte,who raised her almost single handedly from a Teenager as her Mum died very young. When a knock at the door one day she opens the door and assuming the guy standing there is her blind date,invites him in,ever though he is early,and she is still in her Pyjamas.

They chat and seem to get on. She goes to get dressed,when she returns,she decides that she doesn't really feel comfortable the guy is still here,and asks him to leave and to come back later,he refuses and attacks her and brutally rapes her,causing her serious facial injuries. He is caught by the Police,and eventually sent to Prison. Miranda loses her chance at a promotion at work,and has discovered she has serious anxiety issues,with her hands constantly shaking. The only way she seems to be able to cope with this is to write to her Rapist in Prison to ask why he did it. He returns the letters back with the title Return to Sender on the envelopes.

This does not deter Miranda as she sends many more,all returned back to her. Till one day she has a return to sender letter back but with the words " you win" on the back.

She decides to visit her Rapist in Prison,and becomes very interested in him. He is full of remorse for what he had done to her,always apologizing. William played by Shiloh Fernandez seems to be a genuinely remorseful man and starts to have feelings for Miranda who he thinks feels the same towards him. Little does he know that this is just a sick game she is playing, to mess with him. When he is paroled from Prison she continues her friendship with him getting him to work on her house.

Her Dad is disgusted with his Daughter and can not believe why she is now friendly with the man who raped her. The final third of the film is shocking ,and Miranda is not the sweet woman,and the victim she seems to be. I will have to admit the final third was something I never expected,and I had mixed feelings about it. Rosamund Pike is more colder and dangerous in this than she was in Gone Girl. The Character I thought Amy should have been in that film.

Rosamund Pike is a gorgeous actress, and I'm glad she is doing more darker roles like this. A lot of people have compared this to the film Misery, which is a shame,as it isn't in the same ball park. But it is a strange disturbing film that makes you think about victims of crime,rehabilitation and revenge.
3/5*** 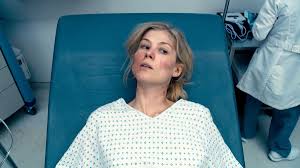