Take Back Your Life. 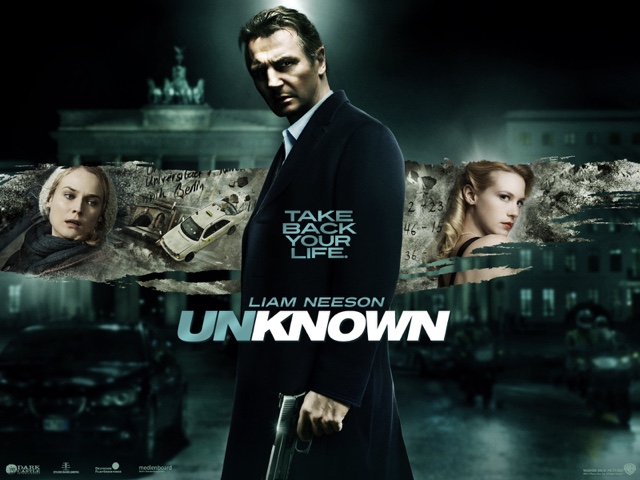 I watched this the other night on late night TV a decent little thriller from 2011, which kind of bridged the gap between the two Taken Movies. With Liam Neeson travelling as Dr Martin Harris with his lovely wife to Biotechnology event in Berlin. When on arrival he leaves his briefcase at the airport. He tells his wife to wait in the hotel whilst he grabs a cab back to the airport. The cab has an accident,crashes into  the water,Dr Harris bangs his head and is left unconscious in the cab,about to drown. When he is rescued by a German woman named Gina.
He then wakes in hospital days later,with no memory of why he is in Berlin,he can remember his name though,and he is married. The problem is when he leaves hospital,strange people are following him,and his wife then claims to not know him. What we have left is a nifty little psychological thriller,yes it is only a PG 13 but still a decent watch,as Liam Neeson is trying to figure out the situation he is in,and as the title says 'Take Back Your Life'
Now when I first saw this it reminded of Total Recall but obviously without the sci-fi element,and if you google it others have thought the same. Now I'm not going to ruin the twist for you,but once you see it you will see what I mean. It also reminded me slightly of the 1987 film Frantic with Harrison Ford.
Now this is a decent film,not action packed like Taken, but still a believable thriller. With great performances by Diane Kruger, January Jones, Frank Langella and Bruno Ganz.
I have Liam Neeson's The Grey to watch and review later,so I hope I enjoy that as much as I did this film.