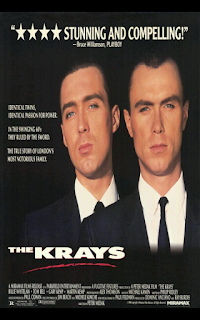 Another Great, Great British film from 1990 staring first time actors and formally musicians,from the New Romantic Band of the 80's Spandau Ballet. Brothers in real life too. Martin and Gary Kemp. The whole press at the time thought what are the producers doing. Then the film came out and every one said"Wow". The British press seem to have an habit of knocking people,think Daniel Craig being named as the New James Bond ,they ridiculed him, how he proved them all wrong in Casino Royale.

Now I'm revisiting this film as I have recently seen Legend,with Tom Hardy,and The Rise Of The Krays,and I'm being totally honest,this is still my favourite film of the three.

Anyway this film made in 1990, May look dated,but it launched the acting Careers of both Brothers,as they were so good in this.Gary Kemp playing the rough and borderline psychotic Ronnie Kray, and Martin Kemp playing Reggie the not quite so violent brother. But both together they were lethal.

One gruesome scene is when Ronnie gets a sword and gives someone a joker type smile, and says "do you think that is funny, I'll give you something to smile about" and slices his mouth open. Another scene is when they shove a sword through somebody's hand,making the person thank then for it afterwards. It is violent,and doesn't really show them in the light people of London would have you believe. Saying they were nice men to the normal East End people. And we're only violent too other criminals, they were both nasty pieces of work, Reggie being the slightly nicer brother. A great film with great actors in it staring also Tom Bell and Billie Whitehall as their devoted mother. A recommended film to check out first before you see Legend.

This film I found to still be the most violent of all three,not an overlong affair like Legend,yes we have no Tom Hardy, The brothers Kemp,still did a decent job though,the fact as well you can pick up this cheaply from most online sites,and supermarkets for as little as £3.00 please give this a go,alongside with Legend,and make up your own minds.
4/5⭐️⭐️⭐️⭐️ 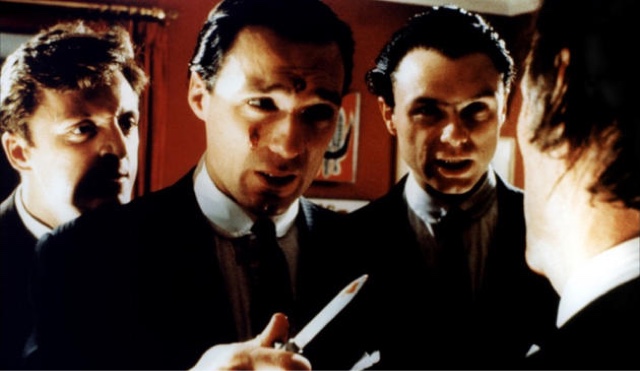