shows CGI and how to do it properly. 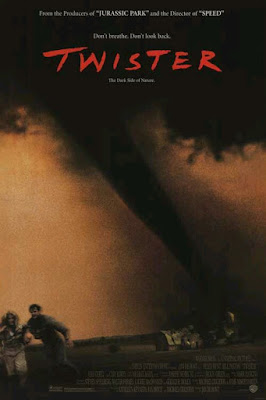 One of the groundbreaking visual effect films of the mid nineties,and CGI was still in its infancy.
A film that pushed visual effects to the limits in 1995. Starring one of the most Underrated Actors ever and that is Bill Paxton,who has been in so many great films,most of them James Cameron's, starred in a Simple Plan,The brilliant One False Move,and the best Vampire movie ever and that is Near Dark
Alongside him was Helen Hunt,normally a very serious actress,but brilliant in this as Bill Paxtons ex-wife,who still carries a flame for him. The most surprising actor is a very young twenty something actor Philip Seymour Hoffman in an early role,before he went all serious and Indie.
Anyway the film is so simple,they chase Tornadoes to try to let of thousand of sensors into the eye of the storm,so they can gather more information about Tornadoes. That is it storm to storm till they get the sensors into the funnel,to get information how they are really formed,and to invent an early warning system. This film is still a classic now,20 years on. It was Jan De Bont second feature after The fabulous speed. He hadn't made a decent film since.