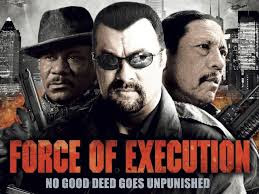 After reviewing Absolution last month I have been on a little spending spree, buying many other titles with Mr Seagal in. Including this title, and A Good Man which apparently make up the trilogy of Alexander films. Now although Absolution was not ground breaking but still a half decent watch. I decided to watch this first, Number 1 in the series. The Trailer looked okay,so I slipped the disk in.
It started with the usual dull tones of Seagal talking about that he was a CIA agent,a bad man now running his own little gang of Mayhem. With a cold hand,but underneath a gentle man wants to come out, a man who wants redemption,and leave his life of crime behind him. At least that is what I'm led to believe, as the storyline is so mixed up jumping from one scene to another, it is actually hard to follow any existence of a script. We have another bad guy The Iceman recently released from prison,hoping to get in on the action. Pretending to work alongside Alexander,but secretly wanting to take his organization down. And that my readers is the basis of this film,which is a simple idea for a film, yet is bogged down with ridiculous script writing,and strange editing,which makes you feel you are watching a 90 minute Trailer. That jumps from one scene to the next,with no cohesion,or any sense whatsoever. Steven Seagal is hardly in it,neither is Danny Trejo who just turns up these days,and gets in any film as a extra who has just walked onto a closed set. It really is a mess of a film,that cannot believe the likes of Ving Rhames is involved with this. I know it is a low budget B movie but I have seen so much better efforts recently, Steven Seagal should hold his head in shame for this turd of a film, my only hope is A Good Man is better, number Two in the Trilogy, or my recent Seagal purchases will be being returned. My advice is just watch the trailer of this film as it makes more sense than the film itself.