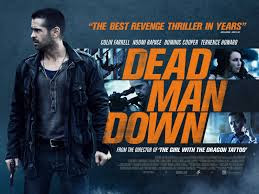 Another  really great thriller from 2013 starring the very Irish Colin Farrell.One of better films of late,yes Fright Night 3D was a gimmick, Total Recall was only okay. And Winter's Tale a chick flick. Seven Psychopaths was genuinely good.

This a very good thriller in the fact, that Colin's family is Killed by a gangland local Boss, played by Terrance Howard. And instead of immediate revenge he plots a slow infiltration into the gang.By first gaining the trust of  Terrance Howard's "Alphonse Hoyt" ,by saving his life,and he uses this to get close to him,know all his movements and finally take them all out.

Years of planning almost comes undone as poor Victor falls for his neighbour the gorgeous Noomi Rapace,straight out of her Dragon Tattoo trilogy. Yes Victor has avoided any kind of interactions,with respect for his dead wife,but also to close the chapter,on his life and to finish his revenge. Now Noomi's Character although still beautiful, plays" Beatrice" a car crash survivor,who's face has been badly scarred,she has no confidence to go out. But these are two souls who need to be together.Two damaged people,one heartbroken,the other physical injuries,who somehow find each other,now will Victor give up all those years plotting,or will he stay with Beatrice.

I'm not going to give away the ending,but it is a satisfactory ending.A very good film and I can wholeheartedly recommend it,yes it is a love story,but a very violent thriller also.
3/5*** 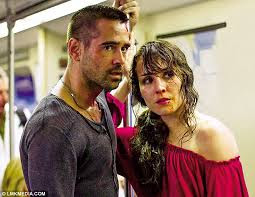