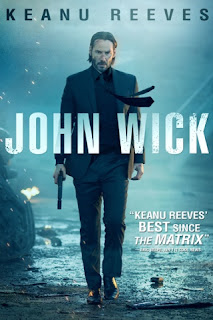 This is without the best action revenge film I have ever seen in a long while, my goodness I thought The Equalizer with Denzel was violent,this makes Equalizer look like a Disney film. Who is John Wick? Well at the start of the film he seems a nice bloke,with flashbacks of his loving wife,we then cut to her Funeral,as he is grieving for her.
After the funeral,and the wake at his house,a package arrives, with a Beagle puppy in a cage,with a note from his dead wife to look after the Dog,as it will give him something to love. It takes time,but he loves that dog.the only other love in John's life is his 69 Mustang,which he drives around an old airstrip for hours,whilst his dog is on the passenger seat.

On the drive home one day he stops for Gas,to then be approached by a guy who offers to buy his Mustang in which John says"it isn't for sale" the guy walks away, smiling saying "have a nice day".That night John is awakened by intruders in his house,he is savagely beaten,his Dog killed,and for what his 69 Mustang. When the car is taken to the local Chop-Shop the owner refuses to take the car as he knows who it belongs to. He then makes a phone call to a Russian Maffia boss, and explains his son has brought in a car,and did he know who it belonged to. "John Wick" otherwise known as the Bogeyman. His face drops like a stone, he trys to reach out to John explaining his sons mistake,and to deal with the problem like men which John refuses. And that is that,a ninety minute film of bloodshed and mayhem,with probably the best gun fighting scenes I have literally ever seen. Almost like the best ever fight  choreography you will ever see,but using Guns. As I said this film is violent,with a body count like no other I have seen,and yes you see that bloody blood all over the screen. With excellent support from Willem Defoe as John's almost Gaurdian Angel,who gets him out of impossible scrapes. Yes this film has plot holes,but doesn't every film,it certainly does not take anything away from this most excellent film. Probably the best action film I have ever seen, I'm very sorry to swear, but it is fu##ing brilliant.
4/5⭐️⭐️⭐️⭐️

More bloodshed than I have ever seen on screen before.