A Film that proves Religious Radicalism is as equal in all religions. 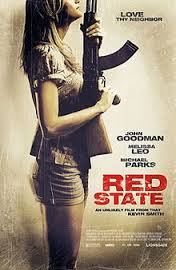 I never did like the film cover,and poster to this film as the Girl in question is the only decent one in this movie of Religious Nutters.
A film about Christian radicalism which takes place within a Huge Ranch, where a Pastor preaches his bile and hate. to his congregation of equally seriously sinister Biggotts.This film is a complete surprise as it is Directed by Kevin Smith, a man mainly famous for Comedy films,and at only about 80 minutes long is a short film,but it does not take away any of the shocking scenes you see in this movie. 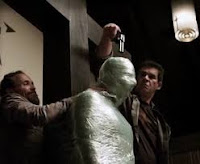 Three Teenage lads answer a Craig's list type add, advertising for Sex, they agree to meet this woman in a trailer promising a night of their lives. They have a Beer and wake up,tied up in this old church.Where they are witness to the vile preachings,and a man being murdered because he is Gay,this is when the three boys realise they are going to be killed,and for what? being horny, by these so called Christian people,because pre married sex is a sin. Imagine a Wako type scene, that happened mid Nighties,when the Police and FBI raid this Ranch,because of the Pastors Radicalism,and known Anti Gay protests.When one of the lads escape and is fired on by the members of the congregation,an FBI agent is killed,and starts a violent stand off between the members of this Ranch and the FBI. It is a shockingly violent film,more so because the Church and Congregation actually believe they are right to be doing what they are doing. Even killing is in the name of God. And yes we know any Christian in his or her right minds would not have these type of vile views.Michael Parkes as Pastor Abin Cooper is one of the screens vilest excuses  for a human being ever and his wife in this played by Melisa Leo is equally disturbing with her views also. It also shows the Gung Ho attitude of the FBI who are equally as brutal with their responce. John Goodman,as the FBI head chief is as deranged with his violent retaliation. A film that shows the worst in human nature,one side who believes they are right by God, the other who think they are right by Law. A shocking film,it really is,but a film that should be seen to prove that radicalism isn't just prevalent in one type of Religion,but it is unfortunate that it can happen in any Religion. 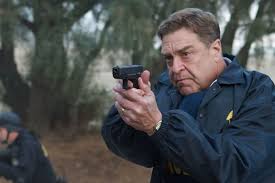