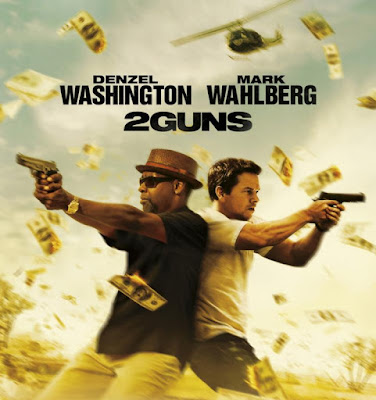 Another pretty decent film from The main man Denzel Again,and Wahlberg aint bad either. A kind of action comedy,which is actually very cool thanks to the coolness of Mr Washington. A simple story of two bank robbers,who are both undercover agents. One working as a DEA agent the other a NCIS agent. Who gets double crossed by their bosses,after they steel from a bank that is a front for a drug cartel. We have the usual high jinks of double crosses, not from the pair involved,but from the organisations they work for,both want the money,and so does the mob boss whose money it is.So the two hero's have to work together to save their asses and clear there names,and avoid being killed. As I said it is not a serious action film, but with a very dark comedy element to it,with both actors bouncing of each other really well. Now Denzel can do dry comedy well, and so Can Mr Wahlberg  now, with two Ted films under his belt, and two comedies with Will Ferrell . It is not a fantastic film, but one you can easily enjoy for 100+ minutes. Yes I enjoyed it with a very good cast from Paula Patton, Bill Paxton, James Marsden and Edward James Olmos, and Fred Ward. Yes it is a decent type of leave your brain at the door type of film,and just sit down and enjoy.