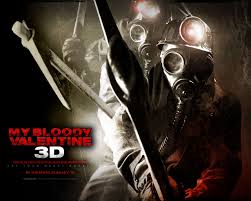 2009 was quite a year for remakes we had this film,Friday The 13th reboot,which in all farness was not bad.The Last House On The Left,another one that was not too bad,The Unborn,which in fairness was only decent one, mainly for Odette Yustman Ass on the front cover. The Uninvited which was a remake of Tale of Two Sisters,again not brilliant,but not a bad effort.
Then we had this a pointless remake just to take advantage of the recent advance in 3d technology. Yes 2009 was the year of one film that was Avatar and then gave the excuse for luckily only a while that every horror film made had to be 3D. Yes I have watched the 2D version I`ve seen the 3D version also. Apart from Jamie King who has a decent pair of lungs on her,if you know what I mean.That was the only really positive in this film. It wasn`t dreadful in any sense still an enjoyable romp,but that is all it is,a bit of fun for 90 minutes.The story is a simple one about a mine worker who on Valentines Day goes on a Killing spree.We then cut to 22 years later where their is a spate of copycat killings.It is as I said a none brainer,and I guessed the killer so early on,it is so obvious.The kills are inventive,but most re made purely for the 3D effect, with pickaxes be thrown constantly at the screen,and eyeballs popping out in glorious 3D. As I said this film was nothing more than a gimmick made purely for the 3D revolution Directed By Canadian Patrick Lussier ,who previously directed White Noise 2, The Dracula Legacy films,and using 3D properly in the fantastic Nic Cage film Drive Angry.Yes as I said previously the film will not set the world alight but all I can say it was alright. 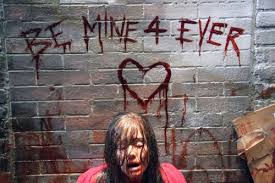