I hate those Fookin Kids 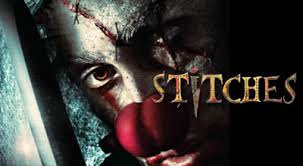 What can I sat about Stitches apart than it is brilliantly bad,but not in a bad way,if that makes sense. Starring British Comedian Ross Nobel,Who is almost unrecognizable as the clown. He is a fowl bad mouthed,kid hating clown, booked for a kids birthday party.When an accident happens involving a trip,an open dishwasher,and a large knife in the dishwasher draw. He never makes it to the end of the party. With all the kids traumatised,the party ends very quickly. With the birthday boy feeling extremely remorseful about the incident. When the same boy attends the funeral of the clown,that same night he revisits the grave,but is disturbed by a prossession of other clowns. Who do a lot of chanting around the grave. 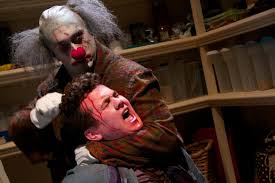 We then see the boy grown into a young adult,still remorseful about the clown death. His friends have rearranged a party for him at his house.To freak you out even more,under the clown code of conduct,you always need to finish the job,if you don't your soul will never rest in piece,this then leads to a regeneration  of the clown,to finish off the party. Problem is as the kids caused the accident in the first place,he has no intention for a show, just revenge. We then have over an hour of the most bizare and inventive kills I have seen on screen in quite a time.It is violent but done in such a way that  I cannot really see anybody being offended by this film,it is really silly,daft and made with a nudge,wink not to be taken seriously. As killer clowns go this film is not scary just a bloody good laugh.If you are a fan of Horror comedy then give this a go, it is so much better than the Scary Movie Franchise,not quite up there with Sean Of The Dead but still an enjoyable British comedy,that happens to be very violent, and has a Clown in it. I shouldn't mention this as I might upset Pet lovers,but a scene in a very tiny bedroom,and the old saying you couldn't swing a cat in here.Is brilliantly staged as he says that,a cat walks past the door.The clown gives a naughty type look,and the cat is seen swinging from wall to wall. I do not condone violence to animals in anyway,but the whole gag just worked brilliantly. Yes I can recommend it is as I said British humour at it's best,a very stupid, funny film, great with a few Beers in and a great night film with friends. 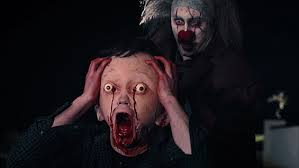