A LESSON LEARNT IN THE ART OF SOCIAL MEDIA 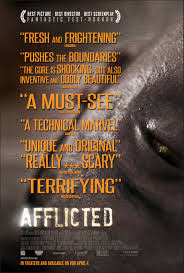 This will be my last review tonight,and they always say leave the best till last.Well this is this Beauty. Afflicted is a Canadian found footage type film.Yes I know studios,and independent film makers have done this to death.But when they do work you have to applaud the film makers.This is without doubt the freshest film I have seen in a while. It is a simple film of two friends, film makers who decide to take a around the world trip,blog about,every step of the way on all social media platforms.Making this journey even more special because of the instant amount of information,and interactions with their friend base.The other reason for the trip is Derek Lee has  AVM a rare type of inoperable blood clot on his brain,against his family wishes he still wants to travel.knowing the clot could burst and kill him at any time.But also wanting to live what could be the final years of his life.Everything is perfect in the first few cities but a chance encounter with a femme fatale French woman,who beats Lee almost to death,and is left with bite marks on his body.When he is found by his friend in his hotel room he refuses to be taken to hospital,in the off chance if he does,he would be admitted because of his blood clot.We then have a decline in the health of Derek days unwell.Then one night he is fighting fit,this continues to be the norm.He will sleep all day,but become so active at night,with more stamina than he ever has.Almost superhuman,with him able to run at 45 miles per hour.All these superhuman skills are being captured on film,by his mate Cliff.Then Derek becomes unwell again but with a hunger he cannot stop,with any type of food,he is starving,but any normal food his body rejects. Strangely he realises the only thing that will quench his thirst,and hunger is blood,but not animal blood,human blood.What we have left with is the most original vampire film I have ever seen,and with his decline Derek is convinced he needs to document everything to prove he is no monster.I absolutely loved this film,it was fresh,new,had great new ideas on an old done before format of Vampire movies.It was Brilliantly acted,filmed almost looking too real an absolute gem of a film. 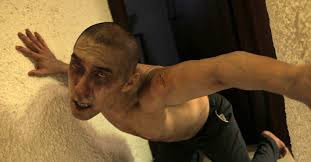