The mighty Kane is back

on August 15, 2015
Not always a fan of sequels,but I'm going to be honest I never saw the original 2006 film. So this sequel was announced,but was going straight to DVD and streaming services in October 2014. Now I watched this recently on streaming services Netflix. The one thing I was happy about was it starred the recent scream queen,the very lovely Danielle Harris,known for her performances In the Halloween sequels in the nighties, the recent star of the Hatchet film series,and also the very good Stake Land. The story carries on straight from the first film,as serial killing Jacob Goodnight corpse is being delivered to the mortuary where Danielle Harris's character works. Now. It is Amy's birthday,and no body wants to work on your birthday,especially a night shift. With a quiet night with no bodies and only the one being delivered the mighty Jacob,she decides with her co-workers to invite some of her friends to join her for birthday celebrations,at the morgue. I mean where better to have a party right. Anyway the body of Jacob is delivered and he is put into the room ready for embalming. Amy's co worker tells her he will work on the body,and for her to stop with her friends. The friends and Amy's possessive older brother turns up. This film stars apart from WWE wrestling superstar Kane, we have Katherine Isabelle who starred in the Soska sisters first film American Mary. Well the talented Soska sisters return to direct this sequel. Now I have not seen American Mary,so cannot talk about that but  the Actress Katherine who plays the sexually active Tamara I thought was awful in this. All legs and nothing else,and really hoped she would be Jacobs first victim but alas we have to wait. Jacob I'm gonna spoil for you is actually not dead,and wants to carry on cleansing the evil he sees in people thanks to his church baring mother from the first film. Trouble is there is little or no eye gouging in this film,which made the original more famous. Jacob still has some decent kills though. The funniest scene in the film has to be Katherine's character Tamara after her boyfriend is killed you see her running through the corridors of this morgue,screaming and falling over her long Giraffe legs. I'm sorry but I found this scene funny,there was no anticipation of her dying,she reminded me of a baby Bambi trying to stay upright on the Ice for the first time. When she is almost decapitated by Jacob I thought "yes at last".I will tell you I was surprised about one character who gets killed off,but it is a film like most slasher films. But it still manages to surprise you and kill charcters you thought would survive. Not a bad film,I think you can enjoy this even if you have not seen the original. Kane is just massive, Dannielle Harris is gorgeous,brilliant in this,so much better than the Hatchet films. So yes please give it a try,it is not brilliant but a good night to invite friends round for a beer and enjoy. 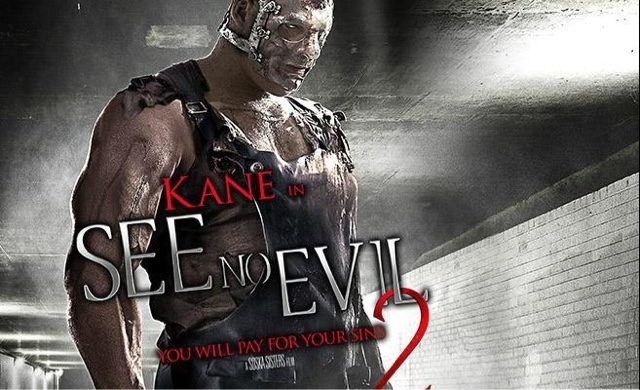