THE MASTER THE DRAGON 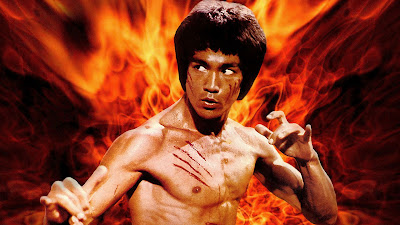 Finally got a chance to have a look at this today on the 40TH anniversary edition of Enter The Dragon. I had it a while a go. Apart from the great edition of extras we have art cards in a great looking Chinese Envelope,unfortunately we do not get as many items as our US cousins,with bookmarks and a 3d moving postcard. I did not watch the whole film as time wouldn`t let me with hungry kids to feed,and being an 18 had to keep it mostly on pause,with them coming in and out of  the living room,even Minecraft on the xbox could not distract them in the other room.The picture quality is ace,a really good HD transfer,well worth the upgrade if you do not already own it on DVD.I don`t need to say how legendary this film is and  how sad that Bruce Lee died so young,before his career had time to take off. And this being his big budget American Debut. The only thing I cannot comment on is the famous Numchaku  scene which has been previously banned in the UK.Other reviews say it is the uncut version,but unfortunately I cannot confirm. So if you have never seen this you must,I still do not fully understand why this is still an 18 certificate in the UK,as so many films have been down graded over the years for example the original Terminator movie. But obviously the martial arts used in this could be copied,so the adult rating remains.This film is still regarded as the greatest martial arts film ever made,and yes I agree with that