I have a busy week ahead this week with new titles to review,starting work again after a two year absence,but I have to include this as one of my must see movies.
Yes I know it is almost 4 years old now,and I have owned it since 2012,but It is a film I forgot how good it was. Staring Michael Shannon,and the always reliable Jessica Chastain.
Now Curtis is a hard working father is loved by his wife Samantha,with a normal boring job,but it brings home the money his family needs,and he also has a very good medical package with his job,which is paying the medical bills for his deaf daughter. 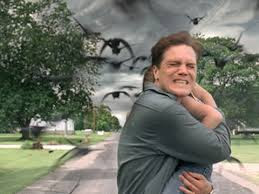 One day Curtis wakes from a bad dream about an impending storm of biblical proportions,he puts it down to a bad dream. But with these dreams becoming more frequent,and actually start to see visions during work,and daylight hours,of storms,birds attacking him and his daughter in a vicious manner.Quite rightly he tells his wife who puts it down to stress.The Visions and dreams become so frequent Curtis cannot distinguish between the two any more.This he decides is a vision only he can see,and he must protect his family at any cost.He spends all his savings on building a storm shelter they could all live in for months,with ventilation,food,running water.His wife goes along with it until he loses his job,for borrowing an industrial digger without permission,from his boss.
His Job gone,all savings gone,and so is the medical insurance for his daughter,the whole town is treating him as a lunatic. He is even diagnosed with a mental illness, and why because his mother suffered from visions also.
This film is so well made and acted so well, yes it is a slow moving film,and some has been very critical of this. But it is a truthful film about the start of mental illness and the start of a hard working man having a breakdown all because he wants to protect his family.
When the storm does arrive it has a sensible conclusion,and when he and his family come away unhurt,it has a believable ending of a man accepting his flaws,with a determination to get better.
This film is a fabulous film I can not recommend enough,and please watch to the end as it has one of the best endings I have seen in a film in quite some time,so much so it made me cry,and that very rarely happens. A must see movie if anything for Michael Shannon's performance as Curtis,as I have never seen him in anything better since, a believable portrayal of a man who is not perfect but one who will stop at nothing to protect his family who he loves and adores.