Sam Raimi back to his best 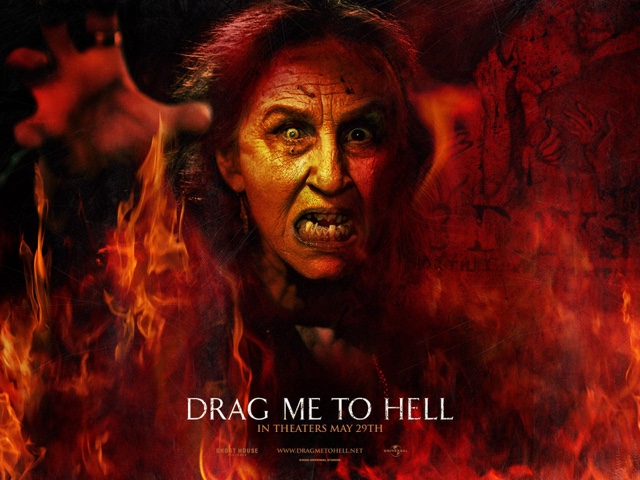 2009 seemed to be the year of the Horror,yes I know films are released regularly,especially more so for the home market via streaming services. It seemed that this year really had some great titles,it was a year for mainly remakes,and if you've read my blog recently I wrote about that over the weekend. This film was so different,yes we have had films about demonic children,sinister ghosts, serial killing mask wearing killers. The question is have we ever had a film about the taboo subject,and that is the Gypsy Curse. This is what this beauty is about. A story in some ways is not as far fetched as it sounds. A Romanian woman Mrs Ganush is on the verge of losing her home,in serious mortgage arrears,she pleads with the bank to give her more time to find the money,or give her a reprieve on her mortgage repayments. We have Alison Lohman who plays Bank Teller Christine Brown,who in just doing her job has to tell Mrs Ganush,that the bank will have to reposses her home. Yes Christine is empathetic with this woman,but is also chasing a promotion to impress her boss. This leads to the woman on her knees pleading to give her another chance,but Banks being Banks don't see normal people,they just see Money. So she is told to leave the Bank. Christine is confronted by the old lady outside the bank,the old lady shouts abuse at her grabs her,and curses to her something in Romanian. Freaked out Christine jumps into her car and drives away. What we have next is Christine plagued by this evil spirit,it will terrorise her for three days,and drag her to hell alive. She finds out the curse is an old Gypsy curse going back centuries,and is very much real as the curse raises a certain demon from hell,to collect it his prize,a living Soul. Now Christine does not really deserve this,yes she was mean,but only doing her job. She has to figure out how to break the curse before it claims her.
Now this film is not terrifying,it is very scary though,very jumpy,but also the usual Sam Raimi type of humour. One scene involving a possessed Goat at a séance,which is scary and gut busting funny at the same time. This is one director who alway has that  ability to equally scare us stupid,but bring such a dark humour to his films, he is a genius. Can I recommend it yes I can if you loved Evil Dead 2, or Army Of Darkness,or even Darkman you will love this film.