Me and Stormy are destined to be together forever 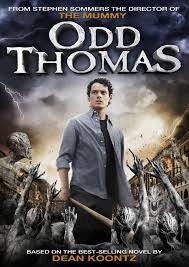 I see dead people and my god I will do something about it.Yes this is the strange story of Odd Thomas a young man from an early age who has seen things no young boy should see,spirits,ghosts demons you name it Odd can see it. But like in the sixth sense when a dead person comes to him for help he will help them.Alongside his police chief friend,kind of like a cold case detective,but the only cold things are the corpses asking for his help.As they cannot pass on until justice has been served. Now Odd manages to do all this whilst holding down a job as a short order cook in a diner.His only friend and love of his life is Stormy Llewelln,who when kids saw a psychic and was told they are destined to be together for ever.Now Stormy works in a local Mall in a frozen Yoghurt,and Ice Cream Store,but they both love each other dearly,even though she knows what her boyfriend does in his spare time. As well as seeing dead things Odd can see Grim Reapers he calls them "Bodachs which feed off the fear of the living,and are only seen when somebody is about to die,the problem is more are being seen daily,and more frequently,which leads Odd to believe something bad is going to happen in his small town. Especially as thousands of Bodachs are circling the local Mall where the love of his life works. Now I'm not going to give any more of the plot away,as it will spoil the ending.The film is brilliant, kind of like an adult ghostbusters for the modern generation. Not scary but a very action packed film with Ghosts. Anton Yelchin is once again brilliant in this,so much better than his previous effort Fright Night 3D Addison Timlin as Stormy is a revelation,sweet natured, gorgeous,and perfect for Odd Thomas the chemistry between them is amazing and so believable.
I cannot believe that this film was not as main stream as It should have been, Directed By Stephen Sommers, the director of The Mummy,this I think was a straight to video film. It was never given a proper release date either in the UK,I have never seen a DVD copy of this film on any British Shelves. I have seen a European version,you can order online. I saw this on Netflix and it is brilliant. Adapted from the book of the same name by Dean Koontz.
I cannot recommend this film enough  it is action packed,funny,and underneath it all hidden away is the sweetest love story,between two soul mates, the film is amazing. 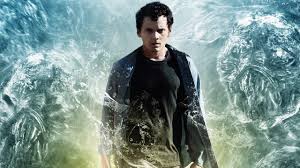