Kinda like the Frightners meets the Burbs,with the people under the stairs 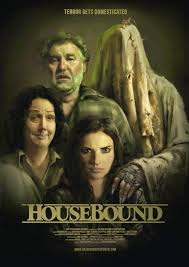 The one thing I am so annoyed about up until two weeks I had not even heard of this film.It is only since I have been doing this Blog that People are following me on twitter,and giving me great films to look at.This was one of them,It is marketed as a comedy horror/ghost story,and parts of it is right. But the one thing I enjoyed so much,apart from being so dam clever and funny,is the multi-layered story approach,you never know quite where the story is taking you.I have always been able to spot plot holes,or even guess where a story will take me.On this I never had a clue.It was fantastic film making,so glad I went into this beauty blindly. So I will not give any of the plot away,as I feel you need to experience the same way I saw this film,so don't read reviews,wiki for any plot details as it will spoil it for you.Just rent,buy,stream this beauty from New Zealand,and I thought the only talent was Peter Jackson,who came from that neck of the woods, I was wrong it is directed by first timer Gerard Johnstone,and the cast is fantastic too with Morgana O' Reilly as the delinquent Kylie sent back home to live with her mother played again brilliantly by Rima Te Wiata on an eight month home detention .Morgana is beautiful,and brilliant as the Grungy Kylie, a smoking swearing powerhouse of a woman,who after all is just a girl wanting to be accepted by her family,she reminded me a little of Noonie Rapace from the Girl with the dragon tatoo,and Idina Menzel,with a little Gina Gershon thrown in. The fact dark haired women has always done it for me,she was gorgeous in this. 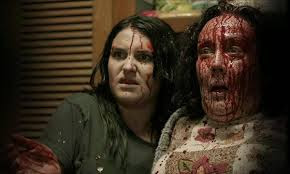 My only gripe is and it is only a small one,is the DVD cover,making it look like a carbon copy of the cabin in the woods,don't!!! lucky it is a double sided cover,so you can choose from the cabin in the woods rip off or the better cover,you can see above you on this page. That is my only gripe about this funny scary film,you don't need to compare it to any other films,be proud that you have made this film your own.