If your gonna rob someone make sure they are not a serial killer first.

on August 15, 2015
This is another great guilty pleasure film. Produced by WWE films and staring our British own Luke Evans,before he was famous in The Hobbit,and Dracula Untold. A film with a delicious irony about a gang of no good scumbags,who on one night just pick on the wrong couple. It is not many times you actually route for the bad guy,but the bad guy is still a nicer guy than the other scumbags in this film.
The problem is Luke Evans just so happens to be a serial killing, social path, who happens to have a teenage heiress onboard,who he kidnapped months ago,and for some reason is keeping her alive,for his own sick pleasure. When he and what we believe is his current girlfriend we see eating nicely in this freeway type cafe,minding their business,when this gang walks in,starts badmouthing this couple,being a cool dude Luke ignores the antagonists and carries on eating.
They later get run off the road by this gang and taken to this abandoned garage,to be tortured for there money,credit card information etc,whilst there car is taken back to their hideout,when the car is examined they find a hidden wall,with the teenage heiress inside,saying"please tell me you killed him". We then cut back to the garage to see a 6 foot oaf of a man trying to be menacing with a knife to the throat of the girlfriend with Luke Evans character looking on. She gets her throat cut and dies and Luke Evans character gets out of his handcuffs by breaking his own thumb and actually using his own blood as lubricant to get the handcuffs off his wrist. This is where this film has the most sickest,but also most genius moment when Luke kills the oaf,cuts out his insides,and actually uses his carcass to cover his body. And when the people in the hideout do not hear from him in a while go to find out why. They find the girl dead the oaf dead but no other guy. So they take the body back of the oaf to the hideout. Which is genius as The serial killing maniac has been hiding in the carcass,and has just been delivered straight to the bad guys.we have an hour of the most inventive kills you have seen in a long time,as Luke takes the gang out one by one in gruesome ways. And as the title says No One Lives,directed by Ryuhei Kitamura,the director of the other sick film starring Vinnie Jones,and that is The Midnight Meat Train. It is an over the top bloodfest of gore and death. But with nastier people being the victims for once, kind of watching an over the top episode of Dexter. The best thing is we never know Luke Evans name in this film,like a Clint Eastwood character a killing machine with no name. With people being killed in horrible ways,but also in a sadistic well they deserve really. It is a brilliant over the top film. And I can't recommend enough. With a cameo role from Brutus Clay from the WWE as the human carcass we have a fun filled blood filled 85 mins of mayhem. 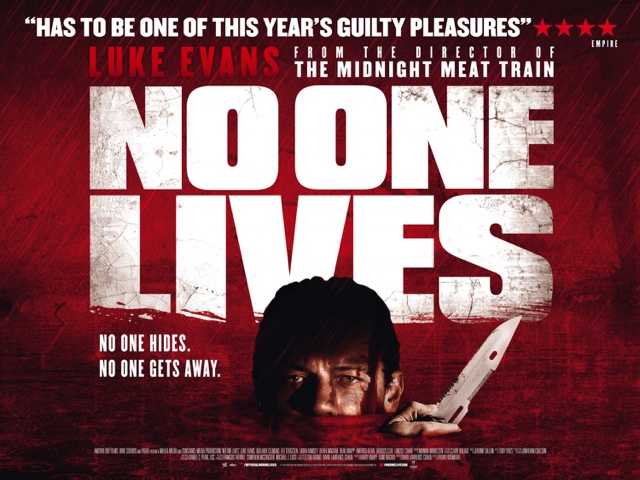