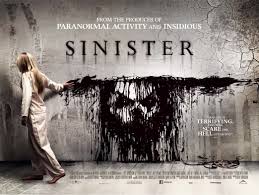 I will have to admit I hated the Insidious films,not the biggest fan of the Conjuring either,or Annabel film.This film I won't say I enjoyed it as that would be a little sick,but it was the best of a bad bunch.A film that was not scary but like the Strangers got to me,and left me thinking about this film for days.And with the sequel coming out soon,it is why I think it deserved a mention.

Now most have seen it or heard about it,about a character who the children call Mr Boogie or the Boogie Man. A demon who possesses kids then they end up killing their family,film the whole thing on super 8 mm film.Then there souls are taken by the demon.The footage of the previous family's deaths are left in the house,to be found,and start of the cycle again,as the demon lives in the film,and once watched is released on to the next unexpected family.

That is the story of this film and the demon. To be honest any actor could have starred in this film, now Ethan Hawk wasn't bad I feel like he was just going through the motions.Any actor could have made this film work,as after all the film is about Mr Boogie,that is why a sequel has been made,with hopefully more screen time to the demon. What got to me is the whole idea of the film,the possession of a young soul,to inflict horrible deaths on a loving family,and then for that same soul to belong to Mr Boogie.

It was made by the producers of Insidious and the other Series that went on to long and that was the Paranormal Activities films.The film was not the scariest of films,but the whole idea of the film messed me around for days.So if you haven't seen it give it a go.I thought it was so much better than The Conjuring, The two Insidious films,and hopefully the sequel will be similar to the first film,but I'm hoping on some shocks as I might have become sensitized to the first film.So that is it for tonight.More Demon based films to review over the next few days,so hope you enjoy and come back for more.
4/5☆☆☆☆ 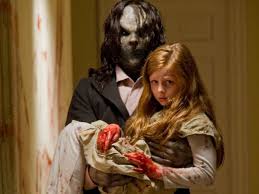