The Devil is actually boring us to tears in this film 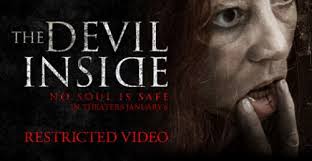 I just wished as much thought had gone into this film,as the fancy poster art,and fake websites they set up to promote this turkey.A film to capitalise on the whole side of exorcism. Done better in so many other films. I think they thought by using the Vatican ,the Rome setting it would give more Kudos to this film,it tried and failed. A film on my first view I fell asleep,baring in mind the short running time of the film,it does not bode well.But I persisted and actually saw a copy in my local Morrisons for only a £1.00 so thought I'll give it another go. No sorry still did not like it.An opportunity missed that could have been a half decent film. Making the cheap option of  found footage was why it failed.It looked cheap,looked amateurist,and in my opinion boring.The fact that this film went straight in to number 1 slot in it's first day then dropped out of existence goes to show the American public showed their disinterest with there feet,by not going. As I said the whole idea could have worked,it is not a bad story idea about an orphan who is determined to find out what happened to her Mother,who was so called possessed by a Demon,and killed 3 priest's in an exorcism.To find out her Mum is still in fact alive and in a psychiatric ward in Rome.She then takes a camera crew as you do to film every minute,with the help of a young Priest.Instead of making this film documentary style,and make a real film it might have just worked. The Anthony Hopkins film The Rite was poor,but still better than this film.This is where this film could have come out on top,instead of being one of the biggest disappointments. Then again as a Budget of just over a $1000,000 and to make back over $100,000,000 world wide,believe it all not the film was a hailed as a success.