I could quite easily put a Hammer to this film. 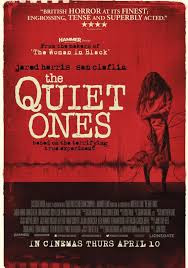 A second release from the recently reformed Hammer studios the first being the creepy,but not scary The woman In Black.
In all honesty I'm not even going to give this a proper review as personally I thought the film was the biggest piece of Turd I have seen put to celluloid. Loosely based on a 1972 experiment on a patient. Who a professor believes a young girl is not suffering from a possession but a metal condition,brought on by mental illness. That is the story,it could have been so much better,but piss poor acting spoilt the whole film,and trying to make a found footage type film using old film stock just did not do it for me. The only positive is the actress Olivia Cooke who plays the disturbed girl Jane Harper. Apart from that avoid this film,and I hate to say that,it was terrible beyond words. Please avoid it is shambles of a film,and a disgrace to the fantastic British Studio it used to be.
One more thing how Jared Harris ever gets any film roles is unbelievable,he is without doubt the worst actor I have ever seen,I knew he was in this but I really thought I could like this film but alas no,he is as shit in this as he is in any film he stars in.He stinks and the film does too I'm afraid and I hate to say that about any film