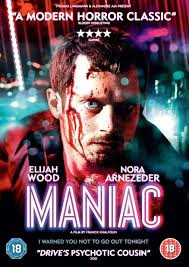 I had to give a mention to this great 2013 film,staring Elijah Wood.a similar type of film, like Girlhouse when a young man is brought up and ridiculed by an aggressive mother,and is witness to sexual encounters involving his Mother from an early age,with men who mistreat her.You are not going to have an easy childhood.Now grown up Frank Zito is a very talented Mannequin maker,with very realistic hair pieces,which he sells to fashion 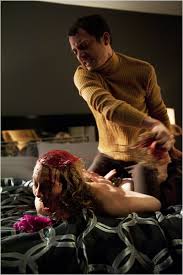 outlets and department stores.The trouble is he likes to stalk women at night,kill them and then scalp them for their hair,which he uses for his very real looking dummies.What I liked about this film was how it was directed,by French man  Franck Khalfoun, why I liked this film is,if you are a resident in the UK, a programme came out on Channel 4 called Peep Show. In which the whole show was directed by first person camera work.This film is the same,you never see Elijah Wood in this but just hear his voice.You see all his kills from his point of view,which is extremely disturbing,like your going for the ride with a serial killer. This film most of you might know is yet another remake of an eighties slasher film of the same name ,but I believe is so much better,and Elijah Wood should be applauded for being brave to go against type to make this film. Would I recommend it? yes I would it is dark,grimly filmed,and the first person view is disturbing,but it really is a good film. It has been compared at the time to the film Drive for it's gritty style of filmaking, I don't think so but others have,if anything it is more similar to Ryan Gosling other film Only God Forgives,for similar camera shots and colour pallets.A cracking disturbing little indie film.