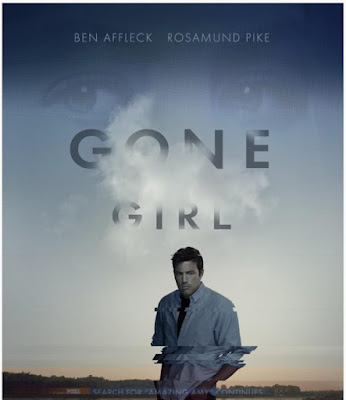 A film that I think has divided most people almost like Marmite,you either got it or you didn't. I thought it was a fantastic piece of film making from our very own David Fincher. Based on the best selling novel of the same name.A year that two of the darkest books was put to screen,this film and the other The Walk Among The Tombstones. This film I'm being honest was fabulous,but I still thought A Walk Among The Tombstones was the better film.This film is a simple film,which is dragged out to over 2 and half hours,with the title character Nick Dunne who seems to have the perfect marriage to the perfect Amy, five years of married bliss,when one day the perfect Amy has gone missing, in a struggle in her marital home,traces of her blood on the floors,walls.
Of cause the first and only suspect is her husband Nick.
With police finding her personal diary with entries that put Nick in a bad light,that he can be violent,with a temper,with no mention of proper violence,but enough to arrest him as the main suspect. Nick Employs the best Lawyer in America Tanner Bolt.The Police let him go through all the motions of press conferences,to plea for any information about missing Amy. But with a slip up at this press conference Nick slips with nervousness and smiles,which the press jump on as sign he is guilty,and paints him as Sociopath. I'm not going to give any plot twist from this point,but Ben Afflick shines in this movie, yes we know he has turned into a brilliant director. But he has never really been taken seriously as a actor,which is a shame as he is really good in this,now Rosamund Pike was equally as absorbing as the perfect Amy,but I still thought something was missing from her performance,when Amy is painted to be not so perfect,and wasn't as cold as she is meant to be. The ending might surprise a lot of people I liked it but others I know have hated it. So all in all a very well directed film,which is slightly over long.I only wished it could have been a little darker,but that is just me. I thought Ben Afflick was brilliant in this,and people and fans have been critical about his appointment as Batman, but I have seen screen shots and he looks bloody awesome as Batman,good looking but brooding,and a good chin. cannot wait till next year. 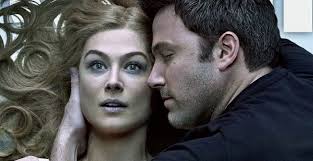