Your Next (2013) FilmReview.Directed by Adam Wingard. 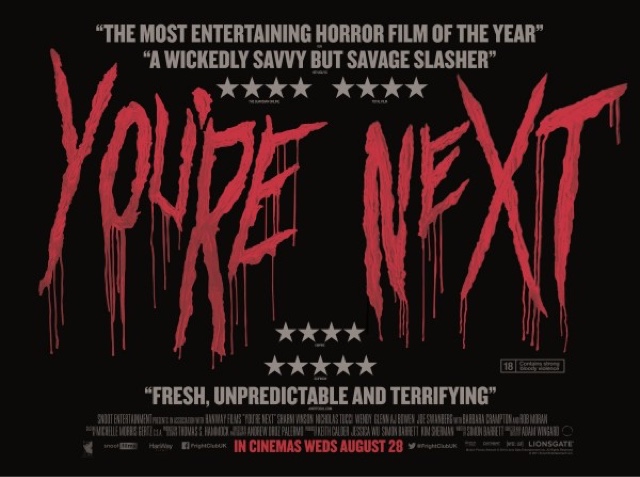 It has been a weekend of what I call guilty pleasures, and this is my final one of the weekend. Directed by Adam Wingard the director of one of my other favourites this year The Guest. This was his breakout film,apart from the short story on VHS 2 the first one about the guy who has an eye transplant,in which he starred in also.

This is unfortunately a home invasion movie, I know you might groan, because for every The Strangers we have The Purge. But this film I absolutely loved, to complete turn the slasher genre on its head.
A simple story of a lovely family reunion, yes it is a typical family,with bickering siblings,partners that do not get on.

Yes you have seen it all before. Mum and Dad are desperate to make this weekend work. One of the siblings is here with his new girlfriend Erin a very quiet girl,he is there to introduce her to his parents,and his brothers and sister.The weekend is going fine considering the bickering, the brothers and even Mum and Dad are quite taken with Erin and her personality.

Everything is going smoothly at dinner time,sat all round the dinner table,until a crossbow arrow shoots through the window of the house, killing a boyfriend of their daughters.
They are then bombarded with crossbow bolts being shot into the house. This is when a group of killers then enter the house wearing animal masks,dressed in black,carrying knives,axes intent on killing the entire party.

This is where I said the genre gets turned on its head,yes we all know the slasher genre,most of the party will die with maybe a few lucky survivors. This is different as the killers never expected an Erin,yes she is quiet,but has good reason to be,being brought up in an abusive community.but a community of modern day survivalists. Who have trained there whole lives to survive,in any situation. So Erin takes it upon her self to defend the family against the intruders.
By any means necessary.

We have a modern day home alone battle,with sinister traps,to kill or maim. It is a brutal film,with many twists in the tale. Of family betrayal,greedy sons intent on claiming thier inheritance. A fantastic film,with a performance by Sharni Vinson as Erin that can only be described as outstanding. A girl who will not just be killed,or be a victim,but a girl who is willing to fight back,and even take the fight to the intruders. The rest of the cast is good, but the cameo from fellow Horror Director Ti West as the first victim is genius.
Can I recommend yes I can. I was shaking with so much adrenaline after this film,I had to go for a walk,to calm down.
4/5⭐️⭐️⭐️⭐️ 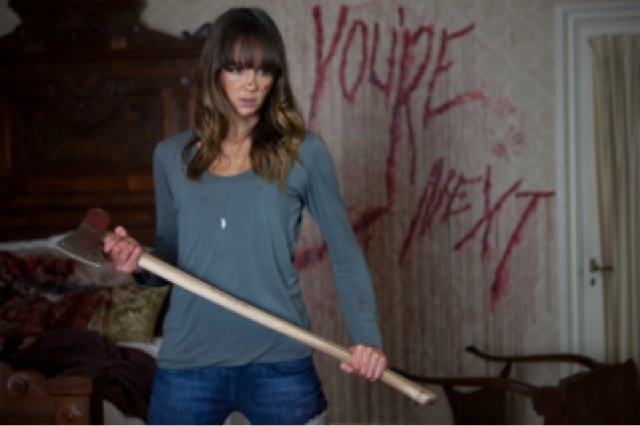