An actor who to my knowledge is still extremely popular

on August 28, 2015
What can I say about this Guy Steven Seagal he is in his sixties,a martial artist who choreographed many movies before his fame in the late 80's with Above The Law or'Nico' in the UK.
This cemented his fame for easily the next decade,with his unique fighting style,first hand,very fast fight scenes,a master with a sword,or knife,his Mediterranean looks,swiped back hair,and his Pony tail. A brooding presence with his height also. Shame that in the 2000 after a few flops,was dropped like a hot potato from the Hollywood scene. Being replaced by the likes of Jason Statham, Mark Wahlberg. Did this stop this hulk of a man "no" he produced his own films using Eastern European money, directors, and Asian finance where films are cheaper to make, yes they were all straight to DVD. He had time to release at least three films a year, whilst having a successful blues career, and a lawman on TV with 3 seasons filming his actual stint as Sheriff.
I'm being honest I stopped watching his movies mid 2005 and only discovered him again this year in  Absolution which I have since found was part of a trilogy.  I've reviewed this film did a review on YouTube also had actually had the most amount of hits on my blog and YouTube channel. I put a poll on Google plus between him and Van Damme and Seagal won hands down. This guy is still as popular now as he was 25 years ago,yes he is a little older,a little heavier,but still a popular action star. A following of loyal fans who has followed him throughout, I gave up on him once yes I did hands up. But I have returned to his films since,and you know some aren't that bad. 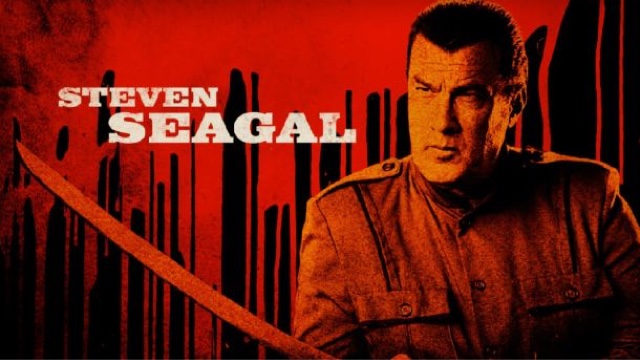