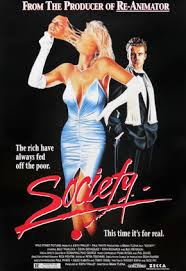 I had waited an age to see this beauty again,made in 1989 but not a VHS release till almost two years later. The strange thing is I never owed it on VHS, or even DVD. I cannot remember whether it was ever released for the UK market on either. It was definitely
released for the European market as It was massively popular,and made back most of the budget from that area alone.The American population at the time didn't either get it,or was just appalled by it. Even Brian Yuzna admitted recently that the disappointment  he had of his own country for not getting it. As years has passed though it has gained a large cult status in the US, UK and European film market, with a lot more people, critics being a lot kinder to it.
I think it is a damn shame it did fail at the time, as the story is as relevant then,as it is now, probably more so now. Brian Yuzna had the vision then of the greed in the late 80's,with the wealthiest in society getting the better deal with things.They get richer,wealthier ,whilst the poor get poorer.That is what this film is all about a young man who is adopted by a wealthy family,but always felt like he never quite fitted in, sister who was born naturally in to the family, always seemed so much more loved by his parents than himself. As he reached his older teenage years he feels it even more so,as his sister like most girls in America reaching her sweet sixteen ,is getting so much more attention from her parents. 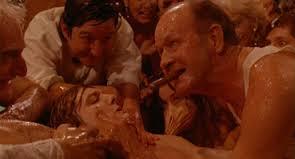 He starts having frightening visions of first his sister, who's body one time is horribly contorted. To strange goings on in his parents bedroom,even with his sister sometimes in the room. He believes it is all in his imagination, until a friend gives him secret recordings of his parents,and other members of the society, talking about the unthinkable incest, murder,and generally anything not nice happening to normal people in the world. This paranoia continues until the disgusting finale ,in which all his fears do come true, about the wealthiest in society living off the poorest in society, in a massive orgy of contorted bodies,that consume the poor. As I said earlier this film is as relevant now as it was then, especially now. 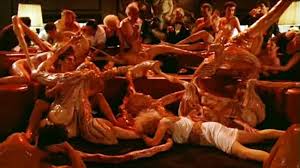 This film has been fantastically been given the re-release treatment by Arrow films, in a two disk set, with both BluRay and DVD with disappointing few extras,but the rest of the package makes up for it with a fantastic embossed sleeve. Included is a graphic novel comic,that carries on from the first film,and a great collectors card.Would I recommend this film yes I would,some will still hate it,some will still be offended by it.Well I say if you are, you just don't get what the point the director wants you to see.
A brilliant film, a fantastic offering from Arrow films, a must have in any horror collectors libary.
4/5****