WYRMWOOD IT'S A BEAUTY MATE 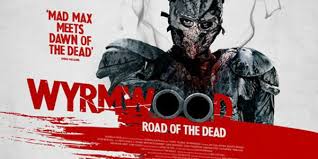 Well I sat down to watch this last night, I had seen the trailer for it,and that is all. I saw the cover saying it is like Mad Max with Zombies. Now I liked Mad Max, but it was never really one of my favourite  films. Anyway I put the film on,and the one thing that I liked straight away,was the lack of trailers,and advertisements. In fact there were none, which in this modern age is quite rare. I went to make myself a drink hoping they would all be finished by the time I got back,went out for a minute and the title screen was already on.Anyway the film started, and it was the frantic fast camera work,very quick editing.I was actually thinking I am not going to like this. Luckily it was only for the first few minutes of the film. A film that starts in the middle,then works forwards . Kind of like a Quentin Tarrantino movie
When Benny,his brother,and mate go out to camp under the stars one night,guitar in hand,and scarily a shotgun,you know something not nice is going to happen. Anyway the threesome are star gazing when they see a load of what they think are shooting stars, turns out they are comets entering the Earths Atmosphere. They fall asleep Benny wakes to find his brother with no head,and his friend moaning and groaning at him,with the familiar slow walk. Anyway Benny is a good bloke and doesn't want to shoot his friend. A very slow chase starts, after a while Benny gives up running and starts walking as the zombie has no chance of catching him, Benny turns round and gives his mate a warning,then precedes to blow of his leg with the shotgun, this is when Benny knows something isnt quite right.
We then cut to a photo shoot with a model,with a clown face , I mean come on clowns, zombies in the same film, are they trying to bloody kill us?.Anyway the photo shoot goes badly,the clown turns into a zombie, chumps on one of the assistant girls. Brooke the photographer climbs onto the low beams in the garage where they are doing the photo shoot. She phones her brother Barry to ask him is his family all right because it has all turned to shit were she was. 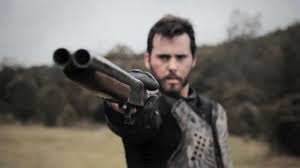 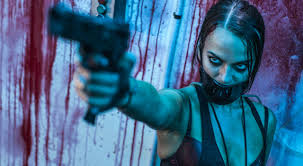 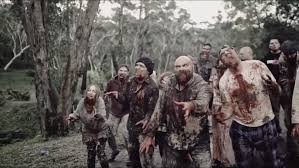 Barry then has to protect his family from a zombie intruder in his house,axe in zombies back and then head soon quietens him down.Anyway being a very good builder Barry grabs his tool belt,nail gun,and gas masks? Anyway his family escape to their car,fighting off the undead, driving away to fetch his sister in the next town.Barry`s daughter becomes unwell pukes up blood,and turns into the undead, followed by his lovely wife. A lovely nail gun incedent ,dead wife, dead daughter,Barry turns nail gun on himself to find no nails left. He gets rescued by a passer by,and ends up bumping into Benny from the beginning of the film.
A lot happens after but I'm not going into great detail, but it involves shadowy government agents, dodgy doctors doing experiments on the undead,Brooke being a guinea pig for this doctor,being  immune  from this disease,but also finding out she has a physic link with the undead, and she can control there actions, once again completely  bonkers.
It is absolutely crazy film from this point, but that is why I loved it,where the hero`s find out that gasoline no longer works because of the comet interference of the atmosphere,but zombie blood is  flammable . So the usual car engine is reworked round to tubes from a zombie,using his blood as fuel. Completely nuts but it works, this is where the whole Mad Max idea comes from, but I actually believe the director and writing partnership of two brothers is brilliant beyond words.
The film is crazy beyond words,as I said before completely bonkers, a completely different take on any zombie movie I have seen recently. The sterotypical names of all the men in the movie,the Australian humour at its best. It actually reminded me of the early Peter Jackson cult horror films before he became a serious film maker. It is without doubt the best and most fun you will have in 90 minutes, and definitely in the top 10 all time zombie movies, and can I say this it is almost as good as Shaun of the dead  and Zombieland for laughs. A must rent or buy I cannot recommend this film enough. Bianca Bradley is stunning as Brooke, Jay Gallager as Barry her brother is spot on. Leon Burchill as Benny is brilliant,and if you have seen any Austrailan film in recent years you will recognise Leon, playing Benny. And top credit to the brothers Kiah Roache-Turner and his producing and writing brother Tristan Roache-Turner, these guys are ones to look out for, because they show absolutely genius film making skills.Nice one Cobber.