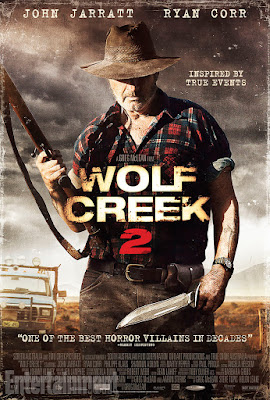 Well I sat and watched Wolf Creek 2 last night, I have been waiting a while to see it, it was a decent price at my local supermarket £3.00. So I though I will give it a go. Now I'm being honest I watched the first wolf creak years ago,and to be honest I was taken back by the brutality of the whole situation. I only ever watched that film once, and I can revisit most films I do watch, but I found it a hard watch.
The Bluray  player was calling me to try the film out. I'm not to sure about yourselves,but if I haven't seen a film, I will always give a look at the trailer first, and although the trailer looked violent,it looked like there was a touch of very dark humour about it, so I put the film in.

Now I'm not going to give a full synthesis of the film, but I can say it shocked me,now I've seen some villains in my time,the old antihero we all love to route for. The Freddy Krugers,Michael Myers, Jason Vorhees. We all know the story they chase down  helpless teenagers picking them off one by one,hopefully in the most gruesome way,we think nothing of this,switch off TV then carry on about our lives. This film is not that type of film,it is brutal it is shocking and the violence is real. I have never felt so uncomfortable watching a film in such a long time. Now House Of A Thousand Corpses was shocking, the remake the Hills Have Eyes was equally as shocking. The Devils Rejects Had my jaw drop of the inhumanity these people had towards other human beings. Wolf creak was something else Mick Taylor has to be the antipathy of evil, a man so far removed from humanity,the Devil walking in mans clothing. He is a vicious bully of a man, a control freak like no other, he is a flat out racist. If your not local your not welcome,and he actually believes he is doing what he does for the greater good for Australia

As I said in most type slasher films we never care about the people killed,we just want them dead,and see the bad guy do it in the most vile way. We see the victims in this film as people,real people, I have never wanted to see the bad guy get his due in the end for a long time. We all know though this is real life,and things are brutal in real life,and people get away with the most awful things,this is that reality!!!!  I have never been so shocked to see someone being murdered on screen before. It was as I said before brutal, one scene has to be the worst I have seen in any horror film for a while. Almost too real to what's happening in the world today when innocent people are being killed in the least humane way, by decapitation. The way he treats and kills this lovely German couple is disgusting. As I said before yes I know it's a film,but it is so real,this man is pure evil.
Mick Taylor  is without doubt the best screen villain I have seen on screen for awhile, being incredibly polite one minute, and being absolutely brutal the next.
Now I cannot criticise the direction,the writing of this film, the Barron landscapes of the outback is absolutely terrifying, the wide open spaces of nowhere to hide, the  picture quality is superb and haven't seen a film look better.

Now John Jarratt, portrays Mick Taylor as a psychopath like no other, Ryan Corr has to be given a great pat on the back as well, an actor I never realised was actually Austrailan, I actually believed he was an English actor. Now I've seen a lot of very poor English accents in films before, with slips on dialect,with Ryan you were brilliant.
This film is bleak though, it is brutal, Mick Taylor is clearly the most dangerous man in Horror at the moment, and with the recent TV show on Fox you will see a lot more of Mick in the future as well.
3/5⭐️⭐️⭐️