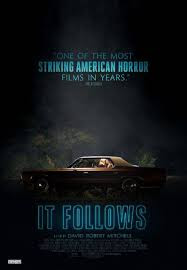 Well I have finally got round to watching this film,which I brought the other day,yes I do buy all my films that I review. I have heard great things about this film.The first thing I noticed straight away,was the fact it seemed to be set an alternate time, a mix between the late seventies, and the very early eighties. Yet the characters are using modern cellphones, and Ebook readers,and yet watching the old square Television sets of the eighties, completely bizarre.

The soundtrack is another talking point, a trance type music, almost like your listening to the Blade Runner soundtrack, or a very Early John Carpenter score. Another talking point, now I think this soundtrack will split people,you will either love it, or be completely distracted by it. I was distracted by it at first, but you do zone out after a while. I will compare the soundtrack to your favourite band,doing a concept album,at first you hate it,but eventually after many listens,you begin to realise the genius of this music.

The film also has a very slow pace to it at first, and I can imagine a lot of gore hounds being put off with this, but please stick with it, because when it does start it will creep you out like no other horror film, genuinely scary, and very unnerving.
Now about the film It is about a young 19 year old girl called Jay, like most girls her age,looking for love,an old romantic at heart. She is seeing this nice young man Hugh,she dresses to impress him for their first date.
They go to an old style picture house with a house organist playing between intervals, once again bizarre, anyway the girls date gets freaked by something in the cinema, and they both have to leave suddenly,now this does not phase Jay at all and even goes on another date with Hugh.

The second date is better, one thing leads to another and they have sex in the car.After sex Jay is all dreamy,when Hugh holds a cloth over her mouth until she passes out.
She wakes up tied to a wheelchair,still half naked Hugh is all apologetic,saying he had no choice, he had sex with her to pass it on, he tells her she will have it until she passes it on also by having sex. This thing will follow you in any guise,and will not stop until you pass the curse on.
And that is the basic idea of this film Jay is followed to the point of a breakdown, but is not the type of girl to have sex frequently. And unless she does pass it on, it will kill her,and go back to the previous host Hugh,and so on.

This film as I said before it is scary,very unnerving, but not jump out of your seat scary,it is a slow film,but stick with it  you will get your rewards from doing so,now I wrote a review about this film not to sure at the time whether I liked it all not, well I have edited this again,to admit I was wrong and it is a very good film.

The actors involved especially Maika Monroe, a star in the making. It is very well written also and directed by David Robert Mitchell, and the soundtrack performed by Disasterpeace as I Said before you will love it or hate it, but isn't that what films should be about, some people have hated this film,for not being scary,or horror enough for them, but I feel it is a low budget,classic in the making,and will be regarded a classic in years to come.
4/5⭐️⭐️⭐️⭐️ 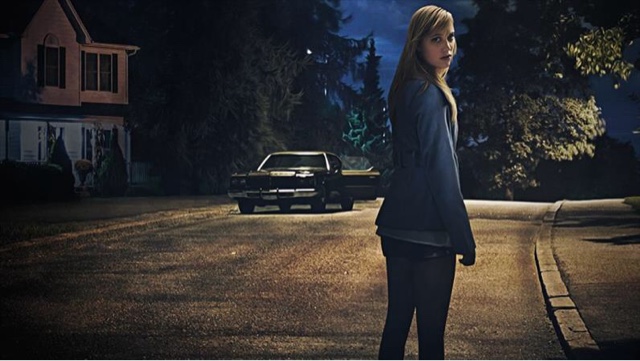