Three Action Scenes do not make an action movie 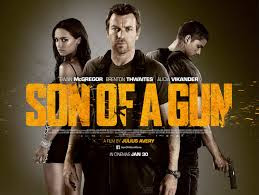 Well it is over I have finally reached my Trilogy of Australian films, to be honest it was four, but I will review Predestination when I review some of my Sci-Fi purchases.
Yes it has been quite a week Last Sunday was the Excellent Wyrmwood, I absolutley adored, second was Wolf Creek 2, which was once again very well made, but I could not, recommend due to the nature of the film, and the violence. Thirdly was the action thriller Son Of A Gun starring Ewan McGreggor, and Brenton  Thraites. and the beautiful Alicia Vikander.
This was a film I had high hopes for, the trailer looked really good, So It was on offer at my local supermarket for £5.00 so I got it last week and gave it a go. 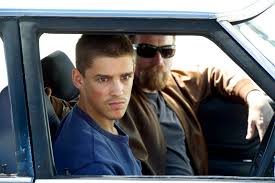 The premiss of the story is a young 19 year old lad is sent to prison for an unknown crime,only a short sentence. He thinks he can keep his head down,do the time and get out. He soon inside attracts the attention of a few bully boys,hell bent on doing the unthinkable to him.
Now J.R. the young lad also is fascinated by an other prisoner doing serious time, Brendan Lynch,who seems to have the run of the prison. A discussion one time between J.R. and Brendan about a game of chess,puts J.R. on Brendan's interesting list.
A chance encounter protecting his cell mate from being raped,catches the attention of Brendan,who now wants to look out for J.R, protect him whilst inside,for a small favour in return.
What we have next is a great prison break movie, followed by an armed robbery on a Gold Mine. 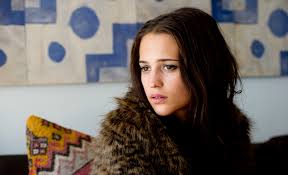 I cannot fault the acting in this film at all, Brenton Twaites was brilliant,showing the nervousness and naivety of this character knowing he is well over his head. He reminded me of a younger Jim Caviezel , and a young Ethan Hawk, as I said he was brilliant,so was Ewan MacGreggor, not on top form,but still putting in a performance with very little effort, Also a stand out was Matthew Nable, who didn't need to say much,but you knew he was Ewan's right hand man in this film, an ex professional Rugby League player, who has turned to acting and has recently starred in Riddick, and Killer Elite with Robert De Niro. Alicia Vikander was absolutely stunning in this role also, a Swedish Actess, who was equally as stunning in the recent Ex-Machina. 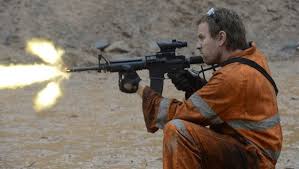 Once again I cannot fault any of the acting in this film.but,and quite a big but is the pacing of the film,I'm not sure if it was deliberate,or the director was just being arty. A film with almost no,or little dialogue spoken in the first 10 minutes,a muted soundtrack, I had to turn my volume up on my T.V in the hope that the volume was too low,but no their is as I said little dialogue or soundtrack in the opening minutes.
And this type of film making continues throughout this film,with what I can say is minutes wasted with actually nothing happening at all. I'm confused was this deliberate,or did the director not know how to write fill in dialogue so left scenes with nothing, but characters standing aimlessly around,for a wasted camera angle. Yes I'm no film maker, but I can watch films,take them apart,break them down, this disappointed me in this film, that parts of it was completely wasted,by no dialogue,sometimes no flow at all between scenes.
Don't get me wrong Julius Avery isn't a bad director by any means, and boy the action scenes are filmed fantastically,he is a very good director at the action scenes, but as I said before 3 carefully filmed action scenes do not make a great action film. If nothing else works in this film, due to a clunky script,and periods of nothing happening.
I am not going to pick apart other plot holes in the film as it would be me being pedantic and just mean,and I'm not that type of person.The ending disappointed me also with a stupid happy Hollywood type ending,I could be mean and put spoilers in but I won't all I can say it would not end like that in the real world. As I said give this film a go it might just be me not enjoying it,but when the film works it works, when it doesn't it will leave you with disappointment.To compare it to Heat on the cover art is also a disgrace, that is just my opinion though.