A perfect sequel, that shows Hollywood how it is done. 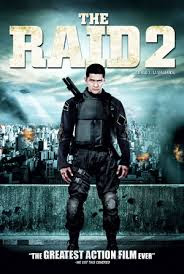 This films ends a perfect week of action films,an Indonesian Martial arts films to rival any other. A new wave of films from Asian Cinema to be proud of,that puts any American efforts to shame. Our very own Welshman Gareth Evans has directed yet another beauty that is very nearly as good as the first,and all plaudits to him for sticking with Indonesia his home,instead of taking that first pay cheque from Hollywood. This guy can direct action films like no other,that uses its own brand of martial arts called pencak silat,with some of the best,and frantic fight scenes I have seen in Quite A while.The story follows on straight after the first,in a debriefing scene Rama is asked would he consider going undercover to infiltrate a known Mob boss,to disclose all operations and uncover any police corruption. The catch is he has to spend time inside prison to befriend the Mob son's Uco who is serving minimal time.This Rama agrees to.
Whilst in prison Rama protects Uco from a suspected Hit in prison,this gives Uco a new friend and bodyguard,when they both come up for parole at the same time Uco is keen to have his new friend in the thick of all mob involvement,as his bodyguard and protector. This gives Rama full information into all the Mob's activity's and to uncover dodgy police officers on the Mobs payroll. I'm not going to disclose the whole film at this point,but it does involve corruption,distrust,betrayals and some of the best professional killers to grace our screens in some time,with the most unique way of killing,involving baseball bats,baseballs,claw hammers. And without doubt the best martial arts choreography I have ever seen,and I'm not just saying that, the fighting,and action scenes are breathtaking. Gareth Evans please stick with what you know,and stay where you are making great cinema, I do not even care if it is Indonesian as it is such great film making you don't even realise you are reading subtitles, and Iko Uwais is a star in the making.