Taken One Movie Too Far 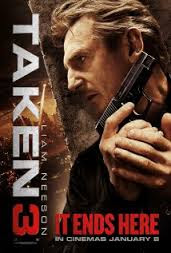 I will have to admit I always been slightly critical about any movie I watch,ever since an excitable teenager,managing to pass for 18 to see some dodgy horror movie. As you grow older you look at some of the films of your youth and think WTF did I like that is was rubbish. The same with films now I am even more critical especially now I review them. I so wanted this to be good,at least better than Taken 2 or Tame down 2 as I call it. 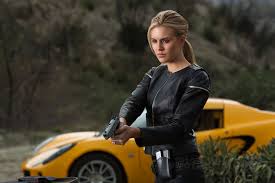 Bryan Mills is back again!!! to finalise the Trilogy,this time it is personal they have taken his goldfish. Sorry being pedantic,but you get my idea. The whole poster says It Ends Here,and I am thinking a carry on from the second movie,another son wants justice for his Dad,Brothers,Cousins,so he comes from Russia,or Ukraine or wherever to kill Bryan. No it is nothing like that,we have his ex wife killed,so Bryan will take the rap for murder,her husband wants this to happen to claim her life insurance to pay off a psycho who he owns money too.Knowing of Bryan's special skills,will evade  custody and find the psycho, kill him,then he avoids paying him the money and walking off with his ex- wife's Insurance money. That is it  I'm afraid is the story for number 3, with absolutely no correlation to the other two movies,this could have been any stand alone movie with Liam Neeson kicking ass. Just using the Taken name to get more bums on seats,rip off more genuine fans.That is why I feel so let down by this now Franchise, Taken 2008 was the most original new breed of action movie,taking what was an average middle aged man who once worked for a Government agency probably the CIA,to rescue his daughter,because he can,because of his special training,his contacts,his basic spying skills,almost made the whole thing believable. Then 3 years later a watered down sequel came out more or less same story,this time his wife is taken hostage. Hence two years later we have number 3 in the franchise, as I will admit it is not a terrible film,it has more violence than number 2, a longer running time,and the action side of it still works. My problem is that it does not follow on from the other two at all,making this movie almost worthless
We just have an evade capture movie from the police kill a few bad guys,the police will figure out in the end you are innocent and that my friends is the whole basis of Taken 3. Absolutely no need to make this movie,only as I said for financial reasons, even Liam is looking board of the whole thing now. Such a shame as he was so brilliant in the dark thriller A Walk Among The Tombstones. The only plus point of this movie has to be the always reliable Forrest Whitaker who was brilliant in this.
Please do not think of me of a hater of this movie, well I'm not I just loved the first film so much,that it's memory is almost being forgotten because of needless sequels,that dampens the effectiveness of the original movie. Can I recommend it's alright but that is it,if I was to recommend any movie it would be A Walk Among The Tombstones,that pisses on this movie hands down.