One of the best Graphic Novels put to screen 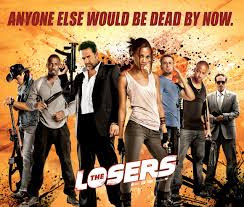 I know a lot of you are going to say why review a film that is now almost 5 years old now,well the reason why it is probably the best action film,to arrive from a comic book series in a while. And pisses over the recent Marvel efforts.
It has probably the best ensemble cast put together in quite some time. The fact that the actors at the time were  not all mainstream actors, is why this film worked.

Jeffrey Dean Morgan, straight out of another comic book role,the fantastic underrated Watchmen, Zoe Saldana who I could watch all day on screen,stunningly gorgeous in any role.more famous for playing Captain Uhura from the recent Star Trek franchise. Idris Alba who is probably the finest,and most handsome Black man working on British screens,and Hollywood at the moment,who is so well liked a campaign was actually started for him to be the first Black James Bond,after Daniel Craig's retirement. My favourite character in this has to be Chris Evans who plays Jenson in the movie,an actor who has been in more comic book franchises to date,but I think has failed to shine in any of them even the Captain America Franchise,of the Marvel Universe. And the failure that was The Human Torch in the disappointing Fantastic Four. I liked him in this and without a doubt my favourite role,apart from the underrated Push, I have seen him in.This is one of the funniest and cleverest  films to come out of Hollywood in a long time. The story is once again of the simplest ideas,about betrayal and revenge, A CIA special Operations group sent to the Bolivia jungles' to take out a Drug Kingpin,but are all left for dead,by their own bosses for refusing to take down the said Kingpin,because of a child's party at the mansion..So to prove to the world that they were not the one's responsible for killing a bunch of children. They take on an offensive role to take down the corruption in the CIA ranks,who set them up as murderers,to clear their names and take out their corrupt boss Played by Jason Patric. I loved this film from the first time I saw it.and on every occasion since I will still watch it, the opening betrayal scenes are a hard watch,and continue to be a hard watch,but it needs to be like that to show the groups determination to get revenge.
A lot of bad reviews have said it was to light hearted,and to comical to be an action film,but I'm sorry this is what sets this film apart from other action films,it has heart,it has characters you genuinely care for,it never takes itself too seriously,but does deliver when 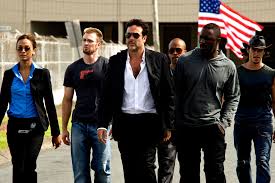 it wants to on all action fronts.A cracking Film I can certainly recommend.Oh one more thing if you are an umbrella carrying person,to keep the shade on Jason Patric don't slip,that would be my best advice.