NOT AN ALIEN FILM BUT A VERY COOL WAR FILM 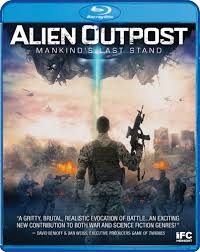 Hello this is my review of the film Alien Outpost, or known in the U.K. as Mankind's Last Stand, it has even been known as Outpost 37.
What can I say,it is filmed documentary style with two film makers making a documentary about the most violent outpost left , in the area of Pakistan on the border by Afghanistan . It is 10 years after the earth was invaded by Alien Invaders, some how the Earth fought back, and defeated the Aliens. Causing a massive retreat from the mother ships, leaving a few Alien Invaders behind nicked named "The Heavies" These outposts were set up to defend the Earth from the final few Heavies left on Earth.
Like most things in politics these are very underfunded by and understaffed by a few remaining soldiers. The strange thing is this outpost has seen an increase on attacks from local tribesman. In which a peace treaty was signed only a decade before. The attacks become more frequent from the locals and less attacks from the Alien Heavies.
I'm not going to give any plot spoilers or give anything away in the film it wouldn't be fair. What I can say it is a very well directed film, and very accurate take on modern warfare. Is it a Sci-Fi 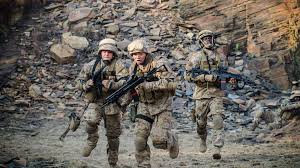 hell no!!! it is a very realistic war movie. Take out the odd Sci-Fi moment, you would be forgiven into thinking this is one of the best warfare movies in recent history, even better than the 2014 film Lone Survivor.

The acting is top notch from a relative unknown cast. It is a shame it had to be marketed as a Sci-Fi movie, as it is far from it. The Sci-Fi elements do work, but the film benefits from a great actual, and believable comradeship from the soldiers. Who after all said and done, are just Men doing their jobs.
Should it matter that they are defending the Earth from a possible second wave attack.What matters is it is a bloody good war movie, and that's the way it should have been marketed. And it pisses on the recent Battle Ground Los Angeles. It is no Independence Day,but a fantastic take on modern warfare, with a realistic edge similar to the wars we are fighting today. 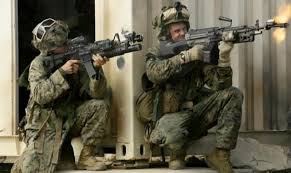