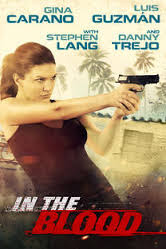 I really had high hopes for this film, a film where if you see the trailer you see the film. The film is not bad,but just not very good. 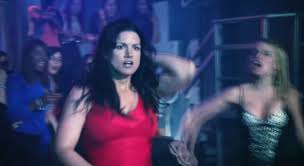 Gina Carano has to be one of the most gorgeous woman out there,who is also deadly in real life, A Muay Thai trained, and MMA champion. Voted most influential women in 2008,by ESPN. She has retired since and became an actress, but why have I seen her in two of the most disappointing films in recent years, Haywire should have been brilliant, but was actually let down by bad directing by Steven Soderbergh, even a cast with Michael Douglas, Ewan McGreggor, Channing Tatum,and the excellent Michael Fassbender couldn't save this mess of a film. The worst thing was,that none of it was Gina's fault,she still was brilliant in it,but she is being let down by bad casting agents. The same is with In The Blood,not a bad looking film on script,but why not let Gina do what she can do best,,and that is kick ass,rather than having her a gun toting heroine, she isn't a bad actress either,but if she is good at Muay Thai let her use that more in her films, utilise it like how the great Steven Segal did in his early films,rather than have her being an all out action hero. 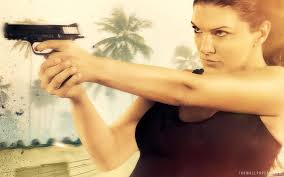 This Story is a simple one a recently married young couple on honeymoon, go on Zip wire the husband falls from the wire into a forest,she see's her husband taken away in an ambulance,never to be seen again. With no record of her husband in any hospital,the police do not believe her,and thinks her husband has just abandoned her on honeymoon, come on have you seen Gina come on who would leave her?
What we have left is Gina playing a woman called Ava on a one woman mission,in a country she is not familiar,to find her husband,who might have been taken,for dodgy organ transplantation  to save some rich drug dealer. The fact we have the usual south American actors showing up, the usual reliable Luis Guzman, who is a fantastic indie actor. And my second gripe is why Have Danny Trejo turn up in almost every film,as a blink and miss it cameo actor,so they can publicize his name on any posters,or DVD  artwork, to maybe make the film more interesting.
As I said the film is not awful,but please let Gina do what she is trained for,and maybe team her up with a decent reliable actor,or actress  to complement her,so she is not let out to dry on her own in some scenes she actually feels uncomfortable with.Can I recommend this film,well if you have 85 minutes to spare,and at a loose end yes, but I would rather see Gino Carano in a film she is actually comfortable in,which she has more control and input,then and only then will we see the great  Gina we all know and love from her fighting days.