Schwarzenegger at his grittiest and best. 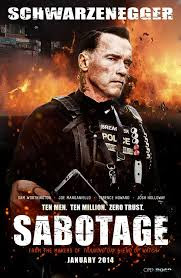 I know that this film is well over a year old now,but as I'm doing action films this week thought this would be fit in quite nicely. I reviewed Van Damme the other day,I have Segal's Absolution to review. So I thought I would slot this in too. It is Directed by David Ayer  who directed the fab End Of Watch,the recent Fury with Brad Pitt,and he is also the fantastic writer of Training Day.
This film certainly shows a darker side to Schwarzenegger normal characters, he plays John Breacher a head of D.E.A enforcement team. Who are all currently under investigation for a messed up drug hit.When millions of dollars of drug cartel money goes missing,they are all being watched by the FBI and the Internal Affairs. When the investigation proves they are all innocent,the team is allowed back together once more. His team is made up of Sam Worthington, Monster Murray, his wife Mireille Enos, Lizzy, Terrance Howard as Julius 'sugar' Joe Manganiello as Grinder,and Josh Holloway of Lost fame playing Eddie 'Neck'. With our very own Olivia Williams playing hard as nails homicide dectective Caroline Brentwood. When members of John's team start dying in horrible ways,similar  to cartel hits,they believe they are being taken out by the drug cartels,who want their money back. But Caroline is convinced it is one of the DEA team,even John who is responsible for their deaths. What we have left is a very violent,tight thriller,about corruption,distrust and paranoia between a normally tight group of people. The violence is also incredible considering in the UK it was only a 15 certificate. But I did hear the director did fight the censors in all countries to argue that a 15 or R rating would get more bottoms on seats.

As I said I did enjoy this film it was a darker side to Schwarzenegger normal roles,we don't know if he is the bad guy,or is he not,you have to watch the film to decide,but I did enjoy this film,and it did not deserve the slating's it got on certain online review sites. I'm so looking forward to seeing Mr Schwarzenegger in his recent film Maggie,in which critics has praised hiS performance. In his more maturing years he is proving to be not a bad actor,and so much more than a bit part Expendable's ,and he is so much better in this than his last effort The Last Stand. So you decide for yourself, but I enjoyed this,and being you can get it below£5.00 in most shops,or even stream on Netflix it is worth a watch. 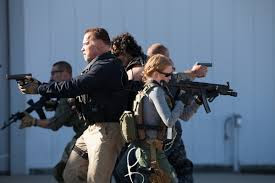