Bloody hell this guy from Downton is Bloody dangerous 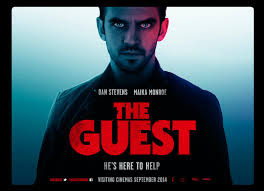 This was one film I saw the trailer and thought this film is going to be good,and my goodness was I right it. It was kick ass. Now I didn't even know who Dan Stevens was,I know he was British, I know he was an actor,and I knew he starred in a little TV show called Downton Abbey,but being a self respected male, I had never watched that show,or even plan too. Rumors started about this film late last year,I can remember seeing an interview on a breakfast TV station with Dan,but they were more interested in the film he did,which was Night At The Museum 3. So I did miss the limited cinema release,but was determined to catch it on DVD. I was not disappointed at all, he was brilliant in this,and so convincing as an Ex war vet who wants to visit a friends family,who sadly died,to pass on his condolences at first hand.This family the Petersons warm to him,and why not? he is charming, helpful, and generally a nice decent young man.As I said this family takes him in and everybody loves him,especially the teenage son who is being bullied terribly at school.

Trouble is strange things start happening around this small town, bullies are dealt with in a violent way, a Boss who will not give the Dad a promotion too,suddenly dies in a freakish accident,leaving the Dad now boss of this company. The only doubter of this family is Anna an older teenager who is not taken in by this strangers apparent kindness to her family,and takes an instant distrust to him.
I have to make this point now, Maika Monroe who plays Anna is a fantastic actor,I have seen her in two films this year, this beauty, and the other It Follows, my god what a talent she is, in her young years, but please don't take that as being patronising as it is not. Maika you are fantastic.This Film  Dan Stevens I take my hat off to you also,you are equally brilliant in this film, a film Directed by Adam Wingard the director of the equally fantastic Your'e Next,and also directed and starred in a small part in the film VHS 2,and yes my sir you are very talented also.

I do want to ask a question and that is to Maika Monroe" did you want to star in two retro films,that would fit nicely into the 80's",It Follows and this film both with 80's style trance music,both retro looking,both I loved were you born in the wrong decade lol. 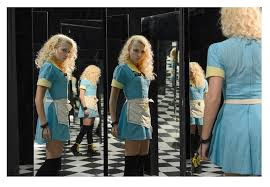 I cannot fault this film it is fantastic and fits into easily my top 5 films of this year list,it is brilliantly acted,with a great script,great direction, very violent,but not in a cringe making way but a film to enjoy without feeling guilty because of the violence, because of a great story,and great characters who you really care for.