BIRDMAN OR (THE UNEXPECTED VIRTUE OF IGNORANCE) 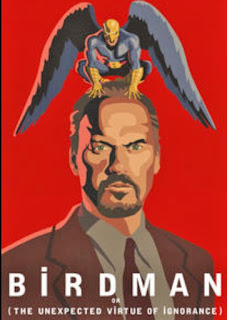 What can I say about this film that has not already been said, It is about a former famous actor who play an action hero called Birdman, kind of like the Marvel franchise we have of late. The actor Riggan Thomson, refuses to do a Birdman 4 in the fear of being typecast, this then leads to the actor struggling for work for the next 20+ years, a divorced father with an estranged daughter,an absent Dad most of his life.This meaning the resentment his daughter Sam has for him.
Now Riggan is desperate to use and almost bankrupt himself on this Broadway play, in which he will direct, co-produce and star in. An unworkable book,to base his script, and play on.A complete gamble that all theatre critics say will be doomed to fail. 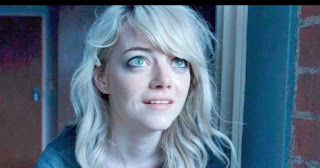 The problem is poor Riggan not only having arguments with his producer friend Brandon, but a constant battle with his daughter Sam, who is also a Runner for the show. He is constantly being bullied by his Alter Ego Birdman, who goads him at every opportunity, belittling him also.
Riggan also appears to have psychokinesis powers,and can move things at will, even injuring an other stage actor so he could get the more established stage and thespian actor Mike Shiner a well known character actor to the extreme. Is this production ever going to work ? arguments with fellow actor Mike, Battles with his daughter Sam, and a fierce theatre critic who vows to bring the show down with a vicious review on opening night, is what poor Riggan has to deal with.

The director Alejandro Gonzalez Inarritu has perfomed an genius of a film, using Michael Keaton as Riggan Thomson, almost sending up his own performances on the Batman Franchise 20+ years earlier. Everthing is right about this film, the wild and unpredictable perfomance of Edward Norton as Mike, the absolute gorgeous Emma Stone in such a grown up perfomance for her younger years. Michael Keaton in his best film role also for years, and proves 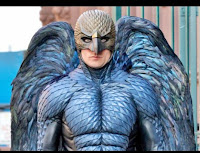 he can still be a leading man again.
You know I alway secretly wanted this film to win at the oscar's but was convinced that Boyhood would win, so glad the Academy came to their senses and voted for this gem of a film.
As I said before everything is right with this film, it is funny,has a great Jazz soundtrack, and I normally hate any Jazz music in films but it works in this soundtrack . A film that even to the end will have you guessing, can he really fly? can he really have telekinetic powers. Is everything real or is it just in his head. A film with so many questions, that gives very few answers away, but still makes it a thoroughly entertaining film.
Definitely the best DVD release this year, shame it is sparse on extras, but definitely one worth owning, and possibly the best film of the decade so far.