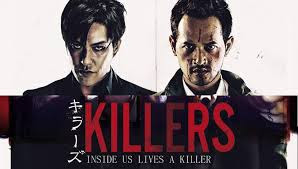 I have been doing a weekend of revenge type thrillers, with this being probably the
best serial killer/revenge film I have seen in a long time.

With it being set across two countries one being Jakarta the other being Tokyo. We have Oka Antara as Bayu a journalist determined to bring down this corrupt Politician becomes an obsession,which has driven him away from his family,his own daughter is afraid of her Dad because of his anger issues.

All because He cannot settle till he brings down this politician. We then cross over to Tokyo, where successful Business Man Nomura played by Kazuki Kitamura a loner,some say a socialpath who dresses well drives a flash car,and likes to torture women to death,whilst filming it and uploading it onto the dark side of the internet. Some how one night Bayu happens to come across footage of Nomura latest killing,whilst searching the web,he is appalled by it,then he cannot stop himself from watching,down to his dark side he has been hiding also.

On a night when Bayu is robbed by two taxi drivers he fights back and shoots the robbers,but for some reason he films the last dying. Which he uploads onto the same dark piece of the internet,that catches the attention of Nomura.What we have next is a bizarre type of friendship between the two,swapping messages,different kills,to the point when Nomura becomes obsessed with Bayu. I'm not going to give any plot details apart from the fact that Nomura almost falls in love with a woman,who he doesn't want to kill, and Bayu gets close enough to take out the dirty politician.

Will their paths meet? I will not tell you.It is a very Brutal film,with probably the worst kill I've seen on screen for a while,with a young woman,and a claw hammer. Also it is a long film running at almost two and a half hours,what the film does try to show you is the darkness and even anger through most people.Even normal people,through modern life pressures,injustices in the world brings one man to kill for good. Whilst the other side is a man who purely kills for sick pleasure.Kind of a Dexter vs Michael Myers,good vs evil, between two killers one kills for a reason,the other because he is just a psychopath. That is the storyline, it is sick in places,and even made me look away in places,and I have been watching horror now almost 30 years.

It is a very good film though,and it is not all subtitled as parts of the film is spoken in English,would I recommend, If you like the dark side of Asian cinema you will love this,if your stomach can handle Audition and Oldboy, and Battle Royale you will be able to handle this film.
4/5**** 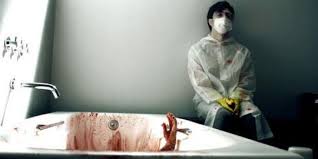