An above average Nicholas Cage film 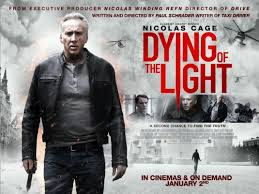 I'm not to sure about you but I no longer get excited or even watch Nicholas Cage films any more as he seems to have one out every month. Apparently to pay for a costly divorce he takes on any film role now, purely for finance reasons. Yes he has been in some turkey's but remember he is an Oscar winning actor,and he is a good actor. He just chooses bad films. Even the films he stars in are usually low grade,smaller budgeted films,he still always puts a decent effort in. After all as I said I do rate him as an actor. 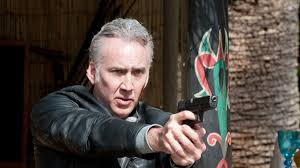 What we have here is a film by producer Nicholas Winding, the director of Drive, and Only God Forgives. And Director Paul Schrader,the screenwriter of Taxi Driver,also Director of Cat People, American Gigolo  and Dominum the Exorcist prequel. What we have is a very tight thriller about revenge and redemption. When a younger Evan Lake is taking hostage in the early nighties by a terrorist group,he refuses to give up his CIA status. He is tortured,losing half of his ear,as his captives cut it off. He is Rescued but it is believed his tormentor died in the gunfight. Cut to twenty plus years later and  Evan is now a desk jockey but still a hero within the ranks of the CIA. When Evan Starts to have the shakes,memory loss,he takes it upon himself to see a private Doctor in a different state to find out what is wrong. He discovers he has an aggressive type of ongoing Alzheimer's disease,within months he will start to lose all functions,memory. When his bosses find out he is put on immediate retirement.Now Evan is still full of regret for never actually killing his capturer and is always convinced he actually never died in the gunfight. With forced retirement on him and months of decline poor Evan is a mess, and Nicholas Cage plays him wonderfully proving he is a very good actor.When Evans former colleague visits him at home one night to inform him that the CIA has reason to believe his capturer and tormentor from years ago might still be alive,this Gives Evan his one last chance as I said at revenge and  to claim his redemption,before his mind goes completely
We are left with a very slow burner of a thriller,with Nicholas Cage and the always reliable Anton Yelchin go rogue to find this terrorist and tormentor of his life Banir.who has recently resurfaced. As I said it is no fast paced action thrillers like the recent Bourne films or even Jack Ryan but a very slow paced but completely believable thriller about one mans last chance to redeem himself,before illness takes him completely.This is without doubt the best film of Nicholas Cage recent career apart from the excellent Joe, and yes I can recommend this film,it is slow yes but as performances go it is brilliant by Nicholas Cage,and an enjoyable thriller about revenge.